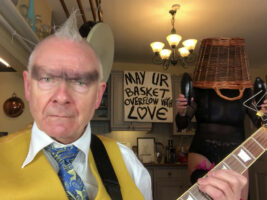 Robert Fripp and his wife, singer Toyah Willcox returned yesterday (13 March) for a fresh instalment of their Sunday Lunch series with a cover of Green Day’s pop-punk hit, Basket Case.

READ MORE: Fripp and Toyah Show Support for Ukraine with Cover of Neil Young’s Rockin’ in the Free World

In this week’s video, the couple left a handwritten message on their cabinets, which read “May Ur Basket Overflow With Love.”
Fripp wore a yellow vest and blue tie – perhaps reprising last week’s tribute to Ukraine – while Toyah, who wore a wicker basket on her head, captioned the video: “Basket Case – once again we at Toyah And Robert HQ are lost for words!“
Check out the pair’s rendition of Basket Case below:

In their last upload, Fripp and Toyah expressed support for Ukraine with a cover of Neil Young’s Rockin’ in the Free World alongside a message that read “A Free World For All is the Dogs Bollocks.”
The couple’s popular Sunday Lunch series has heard the duo cover a range of classic hits, including Black Keys’ Lonely Boy, Smashing Pumpkins’ Bullet with Butterfly Wings, Dead Kennedys’ Too Drunk to Fuck and Billy Idol’s White Wedding.
In February, Fripp’s band King Crimson announced a new documentary, In the Court of the Crimson King, that is slated to premiere today (14 March) at the 2022 SXSW film. Originally announced back in 2019, the Toby Amies-directed feature includes in-depth interviews with Fripp, as well as an array of ex-members.
“King Crimson is a band that people literally are dying to be in” wrote a description of the film. ”In the Court of the Crimson King is a dark, comic film for anyone who wonders whether it is worth sacrificing everything for just a single moment of transcendence.”
The post Robert Fripp and Toyah get chaotic in their Sunday Lunch cover of Green Day’s Basket Case appeared first on Guitar.com | All Things Guitar.