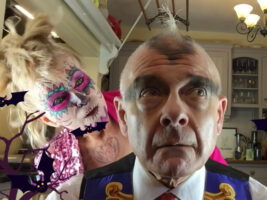 Robert Fripp and Toyah have served up a special Halloween edition of Sunday Lunch by covering the Talking Heads classic Psycho Killer.

The video was uploaded to Toyah’s YouTube channel yesterday (31 October) with the caption: “All we can say is – ‘Happy Halloween!’ – Trick or treat guys!!!”
In this episode, Toyah wore Día de los Muertos make-up and jived on the kitchen countertop to the song.
Long-time viewers of the couple’s Sunday Lunch series will probably know it isn’t only on All Hallows’ Eve that they put in the effort to get dressed up. Previous instalments of the saga has seen Toyah dressed up as the devil, a punk, an angel, a nurse, a bunny rabbit, a police officer, and a cat.

It seems the couple are taking turns to perform each week’s cover tune by dancing on the kitchen counter; last week it was Robert Fripp who got jiggy to The Strangler’s Peaches.
The new table-dancing format began as Fripp returned from the US leg of King Crimson’s Music Is Our Friend tour. The progressive rock legends are due to hit the road again at the end of the month, with back-to-back shows at Tokyo’s International Forum on 27 and 28 November.
The post Robert Fripp and Toyah get spooky with cover of Talking Heads’ Psycho Killer appeared first on Guitar.com | All Things Guitar.