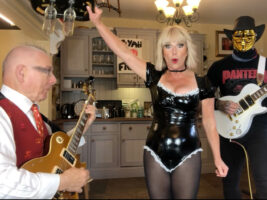 Robert Fripp and Toyah have returned with another episode of their Sunday Lunch cover series, taking on You Really Got Me by The Kinks.

The cover, which once again featured masked guitarist Sidney Jake, was released on Toyah’s YouTube channel yesterday (18 July) with the caption: “Another storming Sunday Lunch from the kitchen trio!”
As a bonus, the episode included the music video for Toyah’s new single, Zoom Zoom, featuring Fripp and co-writer Simon Darlow on guitar. The track comes from the singer’s upcoming album, Push Pop, due out 27 August.

Last week, the Kitchen Trio shared their cover of Pretty Vacant, one of the tracks from the Sex Pistols’ historic LP, Never Mind the Bollocks, Here’s the Sex Pistols.
The future of the Sunday Lunch series is still unclear as Fripp is set to hit the road with King Crimson on a North American tour this week. The legendary progressive rock band will kick off the trek with a show in Florida on 22 July and close things on 11 September in Washington, DC. They will be joined by The Zappa Band on several dates.
The current touring iteration of King Crimson will feature bassist Tony Levin, vocalist and multi-instrumentalist Jakko Jakszyk, multi-instrumentalist Mel Collins and three drummers: Pat Mastelotto, Gavin Harrison and Jeremy Stacey.
The post Robert Fripp and Toyah share cover of You Really Got Me by The Kinks appeared first on Guitar.com | All Things Guitar.