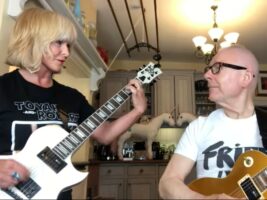 Robert Fripp and his wife Toyah have shared a new video compiling some “unseen” moments from their ongoing Sunday Lunch video series.

READ MORE: The best Christmas and holiday gifts for guitarists in 2021

The video includes a dance lesson in quintuple meter, candid moments from previous episodes, as well as a fun guitar jam – in which the King Crimson mastermind shows off his formidable string-skipping chops – to close things off.
“As a special treat for christmas, we have compiled a ‘unseen’ show for you!” the couple captioned the video. Watch it below:

The episode of Agony Aunts Unseen arrived alongside another Christmas themed episode for the holiday season, in which Fripp and Toyah sang along to Ding Dong Merrily On High.
“The Frippcox household take on another festive anthem. And we have nothing further to say!” they captioned the episode.

In previous festive instalments of the series, we were gifted renditions of 12 Days Of Christmas, Rudolph The Red-Nosed Reindeer and Silent Night.
With just one more Sunday to go before the Christmas weekend, it’s anyone’s guess which carol the couple will decide to take on next.
In other King Crimson news, a cryptic tweet from Fripp after the completion of the band’s final show in Japan this year, has fans wondering if the progressive rock legends have quietly ended or are, perhaps, on the crux of yet another new iteration.
On 8 December, Robert Fripp tweeted that King Crimson had “moved from sound to silence” at 9:04pm on 8 December. The cryptic message was reshared by the official King Crimson Twitter account, marked as a “significant moment in time”.
Only time will tell what’s in store for the group.