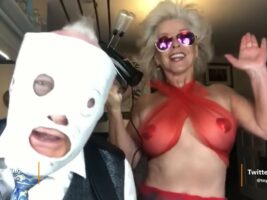 READ MORE: Robert Fripp and Toyah are going on the road with the Sunday Lunch Tour 2023

The track, which was released in 2008 as a second single from Slipknot’s All Hope is Gone album, remains one of the heavy metal band’s biggest hits. 14 years later, the couple show their love for the band with a performance of the track — all while Fripp dons a Corey Taylor-inspired mask and Wilcox wields an electric whisk.
Behind them, in typical Sunday Lunch fashion, a banner on the kitchen cabinet proclaims: “Every note is hope”.

Beginning in 2020 at the height of the pandemic lockdowns, Fripp and Toyah’s popular Sunday Lunch series has heard them take on a number of classic hits, including Foo Fighter’s All My Life, Neil Young’s Rockin’ in the Free World, Smashing Pumpkins’ Bullet with Butterfly Wings and Billy Idol’s White Wedding. The couple recently announced that they will be embarking on a Sunday Lunch tour in 2023, with venue and ticketing details to be revealed soon.
Toyah will also release her upcoming single, a cover of Grace Jones’ classic Slave To The Rhythm, this August. The artist has an intimate connection with the Darlow, Trevor Horn, Bruce Woolley and Stephen Lipson-written track, having originally sung on the demo that was rejected by Frankie Goes To Hollywood before it was picked up by Jones.
”It sounds amazing, totally different to Grace Jones’ iconic and perfect original,” Toyah has said of the track.
“My version will surprise all, it has a connection to the words that suddenly revealed itself as soon as I put the main vocal down and Fripp played. The three of us really are a great musical team, we are very excited.”
The post Robert Fripp and Toyah Wilcox cover Slipknot’s Psychosocial on this week’s Sunday Lunch appeared first on Guitar.com | All Things Guitar.