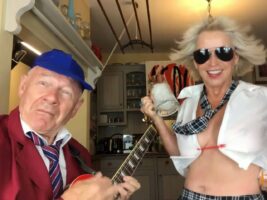 Robert Fripp and his wife, singer Toyah Willcox are back with a thrilling cover of AC/DC’s Back In Black on this week’s episode of Sunday Lunch.

READ MORE: Dave Grohl believes his daughter’s generation will “create the next revolution” in music

The video sees Fripp decked out in a schoolboy outfit a la Angus Young as he strums to the rock band’s iconic riffs. Beside him, a schoolgirl-esque Toyah belts to the 1980 classic while shooting rubber bands at the camera.
The sizzling performance ends with Toyah pouring a glass of ice down Fripp’s shirt, with the prog-rock legend screaming, “Oh, that’s really horrid!”

Beginning in 2020 at the height of the pandemic lockdowns, Fripp and Toyah’s Sunday Lunch series has heard them take on a number of rock classics, including Foo Fighter’s All My Life, Neil Young’s Rockin’ in the Free World, Smashing Pumpkins’ Bullet with Butterfly Wings and Billy Idol’s White Wedding.
The duo recently announced that they will be embarking on a Sunday Lunch tour in 2023, with venue and ticketing details to be revealed soon.
Toyah will also release her upcoming single, a cover of Grace Jones’ classic Slave To The Rhythm, next month. The artist has an intimate connection with the Darlow, Trevor Horn, Bruce Woolley and Stephen Lipson-written track, having originally sung on the demo that was rejected by Frankie Goes To Hollywood before it was picked up by Jones.
“It sounds amazing, totally different to Grace Jones’ iconic and perfect original,” Toyah has said of the track.
“My version will surprise all, it has a connection to the words that suddenly revealed itself as soon as I put the main vocal down and Fripp played. The three of us really are a great musical team, we are very excited.”
The post Robert Fripp and Toyah Wilcox let loose in spicy cover of AC/DC’s Back in Black appeared first on Guitar.com | All Things Guitar.