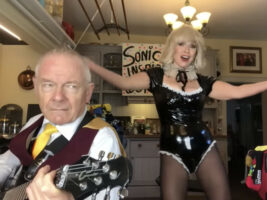 Robert Fripp and Toyah Willcox rock out to Have Love, Will Travel on Sunday Lunch

Internet’s wackiest musical couple Robert Fripp and Toyah Willcox are back to spice up your weekend with a Sunday Lunch cover of Have Love, Will Travel by Richard Berry.

READ MORE: Chad Kroeger on Nickelback’s success: “Anybody that thinks that we take this band seriously is hilarious”

Garage rockers The Sonics famously covered the song in their 1965 album Here Are The Sonics and now, it’s Fripp and Willcox’s turn to put their spin on the 1959 R&B classic. The video sees Fripp jamming on his guitar and a latex-donning Willcox on vocal (and dance) duty as she tosses pieces of clothing into a red suitcase.
Meanwhile, a poster on the duo’s kitchen cabinet reads “Sonics Inspire the World”.
Watch Robert and Toyah cover Have Love, Will Travel below.

Beginning in 2020 at the height of the coronavirus pandemic, Fripp and Willcox’s Sunday Lunch series has heard them take on dozens of rock hits, including Foo Fighter’s All My Life, Neil Young’s Rockin’ in the Free World, Ozzy Osbourne’s Crazy Train,  Smashing Pumpkins’ Bullet with Butterfly Wings, and more recently, Can Your Pussy Do The Dog by punk-rock band The Cramps.
For those who can’t get enough of the pair’s kitchen shenanigans, Fripp and Toyah have announced that they will be heading out on a Sunday Lunch Tour next year. Joined by Willcox’s Posh Pop Band, the Sunday Lunch Rock Party 2023 UK tour promises “the legendary artistic twists that both Robert and Toyah are renowned for.”
Tickets are now available. Check out the list of dates below.
September 2023
30 – Wimborne Tivoli
October 2023
01 – Cheltenham Town Hall
07 – Harrogate Royal Hall
08 – Whitley Bay Playhouse
09 – Salford The Lowry – Lyric Theatre
14 –Worthing Assembly Hall
16 – Liverpool Philharmonic Hall
19 – Bury St Edmunds The Apex
20 – Basingstoke The Anvil
21 – London Shepherds Bush Empire
25 – Buxton Opera House
26 – Shrewsbury Theatre Severn
28 – Swansea Grand Theatre
29 – Birmingham Town Hall
The post Robert Fripp and Toyah Willcox rock out to Have Love, Will Travel on Sunday Lunch appeared first on Guitar.com | All Things Guitar.