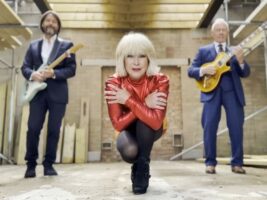 Robert Fripp and his wife Toyah Willcox have released a full cover of Grace Jones’ Slave to the Rhythm on this week’s episode of Sunday Lunch.

READ MORE: Glyn Johns was reluctant to work with The Eagles after seeing them live: “It was in a club with about four people… it didn’t impress me”

Joined by former Buggles member Simon Darlow, who worked with Willcox on her latest album Push Pop, the couple take fans on a trip out of their familiar kitchen setting into what looks to be a building site.
The latest version of Jones’ 1985 classic sees Darlow and Fripp on guitars, as Willcox sings and dances to the camera. The video was conceived, directed and co-edited by Willcox, and you can now stream the track over here.
“It sounds amazing, totally different to Grace Jones’ iconic and perfect original,” Toyah has said of the track.
“My version will surprise all, it has a connection to the words that suddenly revealed itself as soon as I put the main vocal down and Fripp played. The three of us really are a great musical team, we are very excited.”
Watch the full cover below.

Beginning in 2020 at the height of the pandemic lockdowns, Fripp and Toyah’s Sunday Lunch series has heard them take on a number of rock classics, including Foo Fighter’s All My Life, Neil Young’s Rockin’ in the Free World, Smashing Pumpkins’ Bullet with Butterfly Wings and Billy Idol’s White Wedding.
In other news, the couple recently announced that a Sunday Lunch tour is in the works, with venue and ticketing details to be revealed soon.
The post Robert Fripp and Toyah Willcox share dreamy cover of Grace Jones’ Slave to the Rhythm appeared first on Guitar.com | All Things Guitar.