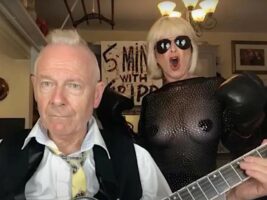 King Crimson’s Robert Fripp and wife, Toyah Willcox have added to their now-notorious series of Sunday Lunch Covers, this time covering one of the most popular metal bands of all time, Pantera.

Already covering some of the biggest metal anthems of all time from the comfort of their kitchen, including the likes of Ozzy Osbourne’s Crazy Train, Limp Bizkit’s Nookie and AC/DC’s Back In Black, the couple are back with their latest performance – this time, covering Pantera’s 5 Minutes Alone.
Keeping an eye on the stories making headlines across the music scene, the cover seems to be a wise choice for the duo; clearly chosen after seeing the outpour of divided opinions following news that surviving members Phil Anselmo and Rex Brown will be reforming the band.
Enlisting Ozzy Osbourne and Black Label Society guitarist Zakk Wylde and Anthrax’s Charlie Benante to fill the roles of brothers Dimebag Darrell and Vinnie Paul, the controversial decision to reignite the band will see Pantera perform for the first time in more than two decades, starting this December.

5 Minutes Alone, the track covered by the couple this week is somewhat of an unorthodox choice, not their most-famous hit but rather a fan-favourite taken from the band’s 1994 release Far Beyond Driven.
In the cover, the King Crimson figurehead channels his inner metal side through Dimebag Darrell’s shred-heavy riffs, while Willcox unsurprisingly doesn’t attempt to mimic the aggression-fuelled screams of Anselmo – providing her own spin on the vocals instead.
Those who can’t get enough of the covers being dished out from the couple’s Worcestershire kitchen will be pleased to know that the duo are taking the act on tour next year, although no dates or venues have been announced as of yet.
Initiating later this month, Fripp is also set to embark on a run of North American spoken word engagements with King Crimson manager David Singleton, entitled the That Awful Man & His Manager tour. Meanwhile, Toyah will be supporting Billy Idol for a string of his UK tour dates next month.
The post Robert Fripp and Toyah Willcox spend 5 minutes alone in new Pantera cover appeared first on Guitar.com | All Things Guitar.