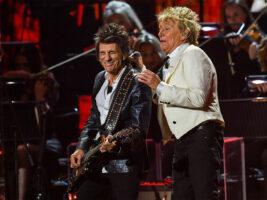 Faces, the English rock band who disbanded over forty years ago, are recording new music.

READ MORE: The Rolling Stones – A Bigger Bang Live On Copacabana Beach review: the world’s best live band on top of their game

The band notably consists of Rolling Stones guitarist Ronnie Wood, as well as Kenney Jones and Rod Stewart. Wood, speaking to The Times, revealed that he has met up with Stewart and Jones recently, in addition to recording with Mick Jagger for a separate project.
“I saw Mick [Jagger] here last week and Rod [Stewart] and Kenney [Jones] were here yesterday,” Wood told The Times. Me and Mick have done nine new tracks for the [40th anniversary] re-release of ‘Tattoo You’.
“And me, Rod and Kenney have been recording some new Faces music. I’ve had a front-row seat on some amazing rock’n’roll projects these past couple of weeks.”
Faces formed in 1969 following the disbandment of Small Faces. They themselves officially disbanded in 1975, when Stewart left the group. This was around the same time that Wood began playing with the Rolling Stones. Faces recorded four studio albums in their time, most recently Ooh La La in 1973. This means that whatever new studio project Wood and company are working on will be the band’s first recorded output in 48 years.
They have occasionally reunited, most recently at the 2020 BRIT Awards, where Stewart, Wood and Jones closed the ceremony with a live rendition of ‘Stay With Me.’ Faces’ founding keyboardist Ian McLagan died 2014, and bassist Ronnie Lane passed away in 1997.
The post Ronnie Wood’s Faces are recording their first new music in over forty years appeared first on Guitar.com | All Things Guitar.