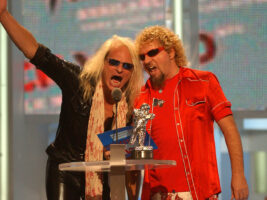 Sammy Hagar has, once again, opened up about his issues with his fellow ex-Van Halen frontman David Lee Roth, doubling down on criticisms of his singing and of how he presents his public image.

Speaking to The Washington Post, Hagar was probed about his on-record dislike of Roth. “I get the sense that your distaste for him as a human is genuine, and that you were never able to broker a peace between you and him. Am I right about this?” the interviewer asked.
Hagar responded by outlining some fundamental differences between him and Roth, saying: “I’m not trying to be a celebrity and trying to be a big star – I’m about being a good enough artist that they accept me in the celebrity world. That’s the way I approach my whole thing, and he does it all differently.
“I think [for him] it’s just all about being a celebrity, it’s all about, you know, having something that gets attention. It’s a whole different style, and I don’t really respect the way he does it.”
Hagar then clarified that he did still acknowledge Roth’s contribution to their shared band, saying: “I respect what he did in Van Halen. Don’t ever get me wrong.” Hagar did also, however, repeat his opinion that Roth can no longer sing well. “He was great for that band, and he’s got a cool voice. He doesn’t sing well anymore, but on the early Van Halen records, he was great, he sounded great, I loved the way he sang, his attitude and his persona.”
Hagar’s comments echo those he made recently on Inside With Paulo Baron, when he stated that Roth’s public persona was completely fabricated. “He’s not what he’s saying he is, He’s pretending. He’s totally bullshit. Everything he does is thought up and it’s an image.” He then added that his voice “hasn’t aged well.”
The post Sammy Hagar criticises David Lee Roth again: “He doesn’t sing well anymore” appeared first on Guitar.com | All Things Guitar.