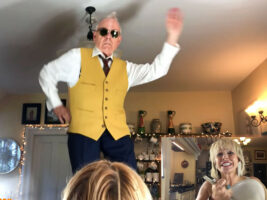 YouTube’s favourite power couple, musicians Toyah Willcox and Robert Fripp, have returned for another Sunday Lunch cover. On the musical table this week is a cover of The Strangler’s Peaches, and on the actual table is Robert Fripp.

READ MORE: Watch Robert Fripp “as you have never seen him before”, dancing on kitchen table in I’m Too Sexy cover

“Well the tables have turned again and Robert’s back on the table… and everything is just Peachy!” Willcox captioned the video.
Fripp table-dances his way through the cover in the powerfully erotic manner the song requires – the 1977 track is one of the dirtiest ever to grace the airwaves, even with the radio version changing some of the lyrics to be less explicit. The word “clitoris,” for instance, was changed to “bikini.”
Fripp and Toyah’s version changes the lyrics further, with Willcox swapping the gender of the song’s objects of desire, likely referring to the one particular man undulating in front of her. The abridged version does cut the lyrical content short before things get too anatomical.
The pair’s weekly ritual of covering a song in their kitchen has seen them take on a number of hits, from The Rolling Stones’ Sympathy For The Devil to The Kinks’ You Really Got Me.
See the latest cover below.