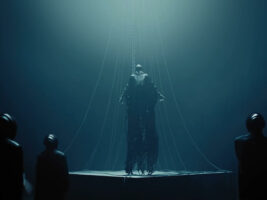 Muse have released their first single since their 2018 LP Simulation Theory, entitled Won’t Stand Down. The track has arrived alongside an ominous new music video.

Won’t Stand Down was previewed just after Christmas, with the short clip of the song showing us the breakdown section at the end of the song as well as a small section of the chorus. When the snippet came out, fans discussed how this could be one of the heaviest tracks Muse has released in a while.
The video is suitably dark to fit the heavier mood, with “a fragile, mysterious figure that siphons the collective energy of a dark army in order to transmute into an augmented being.”
Check out the full track below to see for yourself.

Matt Bellamy said of the track in a statement: “Won’t Stand Down is a song about standing your ground against bullies, whether that be on the playground, at work or anywhere. Protecting yourself from coercion and sociopathic manipulation and to face adversity with strength, confidence and aggression.”
The post See the spooky video for Muse’s new track Won’t Stand Down appeared first on Guitar.com | All Things Guitar.