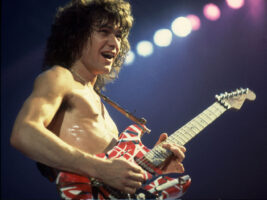 It’s a testament to Edward Van Halen’s seemingly unquantifiable influence and legacy that 40 years after he first set the guitar world aflame, fans are still debating and dissecting every minutiae of the late, great icon’s gear to uncover the secrets of his inimitable style.

But such debate often breeds misinformation, and such is the internet, these inaccuracies can soon become accepted truth if we’re not careful. EVH also didn’t like to be copied, and so he would often say and do things to throw people off his sonic coattails. As such, Eddie’s own misleading remarks, which were were often delivered through a haze of booze and drugs to further complicate matters, have shrouded these myths and allowed speculation to run rampant.
With that in mind, we’ve picked out six of the most popular rumours and, with the help of some of our friends within the Van Halen camp, we’ll seek to find out once and for all if there is any truth to them.
He painted the Bumblebee guitar
Eddie painted his iconic Frankenstrat (both times), and he also painted the Shark. But he did not paint the 5150 guitar or the ‘Bumblebee’ guitar seen on the cover of Van Halen II. Although he claimed in interviews that he had built and painted the Bumblebee prior to the photoshoot for VHII, we now know that’s not true. The guitar was built, painted, and delivered to Eddie by Wayne Charvel and his crew in the autumn of 1978.
The pickups in the Bee were changed out on several occasions, as was the neck. At one point, it is very likely that the Bee had the original neck and PAF out of the original Frankenstrat. At the time of its permanent retirement, the Bee sported a double white DiMarzio Super Distortion. Eddie later had a falling out with Charvel over the production of unlicensed copies of the guitar. The original Bumblebee now rests with Dimebag Darrell.

Eddie Van Halen’s amplifiers were stock
Some have claimed that Eddie’s main amp for the first six Van Halen records – a 1967/68 100-watt Marshall Super Lead, was stock. Eddie had claimed in interviews that he had his amps modded by Jose Arredondo. Later, Eddie would claim that he only said that to give his friend Jose business and that the amp was stock.
We brought this rumour to Kevin Dugan, who worked for Van Halen for 30 years, primarily as Michael Anthony’s bass tech. He said that he had personally dropped Eddie’s amps off at Jose’s shop on several occasions and that the amps were modded by Jose.
There are also other factors that lend credibility to the theory that the amp was modded. When David Lee Roth quit the band and went solo, he hired Steve Vai, who went to Jose and had him mod his amp. This allegedly resulted in a falling out between Jose and Eddie. Vai’s modded amps were later sold to John Sykes. Eddie’s tech, Rudy Leiren confirmed in an 1985 issue of Guitar World that the amp had been modded, but wouldn’t divulge what specific mod was done.
There are around five variations of mod that Jose has been known to use. He would often add an extra gain stage at the start of the circuit; another mod was adding a master volume. On Eddie’s amp, according to sources, Jose added a Fat Cap, and a negative feedback circuit. The amp also had a 50k mid pot. Usually they’re 25k, but Marshall would sometimes use different pots at the factory back then, so this may not have been a mod, but a factory mistake. In addition to Eddie’s, Jose also modded Michael Anthony’s amplifiers.

He used a Variac to increase voltage
It’s true that Eddie Van Halen used an Ohmite Variac unit in conjunction with his amplifier and that it was a key component of his iconic sound. But the Variac, in Eddie’s case, was used to restrict the voltage flowing into the amp to around 88-90 volts. Many amps were blown up by those who believed Eddie used to use the Variac to increase the voltage going into the amp.
Here’s something else to consider: vintage Marshall amps that had been shipped to the were designed to run at 110V, but in 1984, the US switched the standard voltage from 110V to 120V. So if you plug a vintage Marshall into a current US outlet, you may damage the amp or at least burn it out quicker.
He boiled new strings to “pre-stretch” them
Many of us will know guitarists who will buy a brand-new set of strings, bring them home, and boil them before putting them on their guitar. They claim it helps to “pre-stretch” the strings and they will stay in tune longer. They often claim they do it because that’s what Eddie Van Halen did.
While it’s true that Eddie Van Halen’s tech at the time, Rudy Leiren, would carry around a hot plate and boil Eddie’s strings, this was done mainly to get more life out of an old set of strings. This was before Van Halen got endorsements and free strings, so it was done as a way to save money. As soon as he was able to afford new strings after each show, he didn’t have to boil them anymore!
Image: Daniel Knighton / Getty Images
A Floyd Rose was essential to his divebombs
Oftentimes when someone wants a Floyd Rose installed on S-type guitars, they’ll say that it’s because they want to be able to do those, ‘Eddie Van Halen divebombs’, but the truth is that EVH perfected divebombs well before he had a Floyd Rose.
One of the most iconic solos of all time, Eruption was recorded while the Frankenstrat still had a standard Fender-style vibrato (off a 1958 Stratocaster). Eddie didn’t start using a Floyd Rose until 1980. It just makes the guitar work on those early Van Halen albums even more impressive!
The coin on his Frankenstrat was used for drop tunings
One popular internet myth was that the 1971 US quarter screwed into the Frankenstrat body near the bridge was used to activate an early version of the D-tuna system Eddie used on his later guitars, to drop the top string from E♭ to D♭. Of course, this is not true.
The quarter was in fact used as bridge stop for the first version of the Floyd Rose to keep it flush with the body. Some also claim that the quarter was removed and put back on the guitar, but that’s not true either.
The quarter didn’t move. Rather, Tom Anderson moved the bridge in 1985 because Eddie had put the pole pieces in the wrong place, making intonation very difficult.
The post Six Van Halen gear myths that people still believe appeared first on Guitar.com | All Things Guitar.