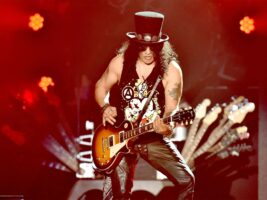 New music from Guns N’ Roses is coming soon, according to guitarist Slash, who has said in a new interview that fresh material is “coming out as we speak”.

READ MORE: The Genius Of… Surfer’s Choice by Dick Dale and His Del-Tones

The guitarist was speaking to Classic Rock when he revealed that the band have been hard at work on a new studio album.
“There’s new Guns material coming out as we speak, and we’ll probably keep putting it out until the entire record’s worth of stuff is done and then put it out solid,” he said. “It’s cool. I’m enjoying working on the stuff and having a good time doing it.”
A full studio album from the famed Los Angeles hard rock group has been hotly anticipated since original guitarist Slash and bassist Duff McKagan returned to the fold back in 2016.
The band’s last LP, Chinese Democracy, came out in 2008 and as far as original members go, only featured frontman Axl Rose.
Last year, Guns N’ Roses released two singles, Absurd and Hard Skool, which were recorded – but not written with – Slash or McKagan. A four-track Hard Skool EP, which includes both singles, along with live takes of You’re Crazy and Don’t Cry, is set to release on 22 February 2022.
The post Slash on new GNR music: “There’s new Guns material coming out as we speak” appeared first on Guitar.com | All Things Guitar.