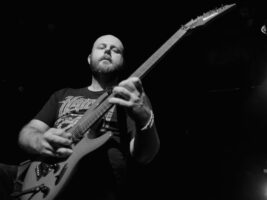 David Andersson, guitarist for Swedish melodic death metal band Soilwork, has reportedly passed away at the age of 47.
Soilwork confirmed Andersson’s passing in a statement on social media: “Sadly alcohol and mental illness took you away from us.”
“We are deeply saddened today, as we bring the terrible news of David Andersson’s passing,” the band wrote on social media. “He was one of a kind and a brilliant man in so many ways. He was our guitarist for more than 10 years and had a big impact on Soilwork’s musical journey forward.”
“We will miss him dearly and will continue to carry the musical legacy that he was a part of. Our deepest condolences go out to his family.”

Andersson joined Soilwork in 2012, and lent his musical talents to four studio albums; the band’s latest album Övergivenheten arrived through Nuclear Blast just a month ago.

on 19 August 2022. Additionally, Anderrson also performed piano and bass for the band.
At press time, no cause of death has yet been revealed. Stay tuned for updates.
The post Soilwork guitarist David Andersson dies at 47 appeared first on Guitar.com | All Things Guitar.