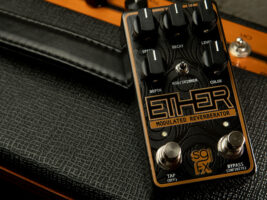 The pedal is designed to easily create shifting, dynamic and endless soundscapes. The bypass footswitch doubles up as an infinite hold switch. There’s also a secondary footswitch for tapping in the tempo of the LFO’s speed.
The pedal’s modulation section features three modulation modes. There’s vibrato, tremolo and harmonic tremolo, all controlled by three waveform shapes: sawtooth, sine and ‘special’. The vibrato modulates the wet signal’s pitch for a deep chorus-like sound, while tremolo can range from subtle volume throbs to more choppy sounds. Finally, harmonic tremolo adds
There’s also an additional shimmer mode, however, this has been deliberately designed to sound less ‘pretty’ than your average shimmerverb, as the algorithm has been set to decay the repeats more dramatically as they sustain.
The level control also allows you to push your wet signal louder than your dry signal, and the colour knob introduces a low- or high-pass filter depending on its positioning.
The pedal is hand-made in Canada, features top-mounted jacks, analogue dry-through, and can work in either true- or trails-bypass modes.
The ether lists for $209. Find out more at solidgoldfx.com.
The post SolidGoldFX launches the Ether, a modulated ambient reverb appeared first on Guitar.com | All Things Guitar.