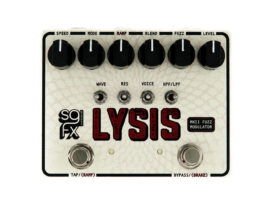 SolidGoldFX launches the Lysis MkII, an update on its modulated octave-down fuzz

SolidGoldFX has launched the Lysis MkII, a new version of its modulated, polyphonic octave-down fuzz.

The pedal’s sound is created using a blend of digital and analogue processing. An FET preamp and high-gain fuzz feeds a digital polyphonic octaver and filter. This signal is then fed back into a transistor output stage for level control.
The filter features a number of different LFO modes, and can work as a high- or low-pass filter with adjustable resonance There are three waveform modes, triangle, sine and square, as well as a fixed frequency mode. The three waveforms have 11 presets each, selected with the Mode knob.
The pedal features an extensive control set for managing its sound, with knobs for LFO speed, ramp speed, fuzz/filter blend, fuzz gain and output level.
The voice switch adjusts between three different octaver modes: octave down, octave up and down and octave down with a fifth. The two footswitches allow for both tap-tempo, ramping when held and an LFO braking effect.
There is also an expression jack, with an internal dipswitch bank that assigns the expression/CV control to different parameters.
Hear the pedal in action with an official demo courtesy of Andy Martin below.

The pedal features soft-touch true-bypass switching, top mounted jacks and lists for $250. Find out more at solidgoldfx.com.
The post SolidGoldFX launches the Lysis MkII, an update on its modulated octave-down fuzz appeared first on Guitar.com | All Things Guitar.