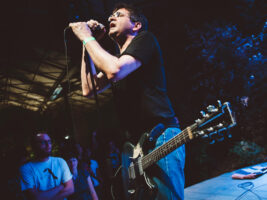 Steve Albini reflects on the “edgelord shit” he inspired, says naming a band Rapeman was “inexcusable”

Producer and musician Steve Albini has reflected on the deliberately offensive aspects of his earlier music career, discussing the reasoning behind such provocation, the position of misunderstanding and privilege from which it came, and the “edgelord shit” it inspired.

Albini is best known for his work with Shellac, Big Black and his huge number of production/engineering credits (Nirvana, Pixies and PJ Harvey to name just three). Albini, in between Big Black’s disbandment and Shellac’s formation, also formed a band called Rapeman, supposedly named ironically after a Japanese manga character, the titular ‘hero’ of violent pornographic comics.
Alongside this, Albini’s previous band Big Black also deliberately evoked offence and disgust. Their songs reference real, or supposedly real, instances of child molestation and brutal murder, and often express the viewpoints of misogynist, homophobic or sociopathic characters.
In a new interview with Mel Magazine, Albini discussed the band name Rapeman, and how it related to the wider history of his music’s provocative subject matter. However, first he laid out the artistic intention behind the often repellent themes addressed by his music.
“There’s a friend of mine, Peter Sotos, who’s written extensively about abuse and murder and things of that nature,” he explained. “A lot of his writing is extremely difficult to read. It’s repellent. You’re brought into the mind of a sadist, pretty convincingly. And I feel like that experience, reading that stuff, is shocking to your core in the way that the horrors of the reality of those things should be.”
Image: Jordi Vidal / Getty
The experience of a reader or listener being shocked to their core is, for Albini, in direct opposition to sensational crime reporting. He cites US news host Nancy Grace as an example, propagating a “show-business” that turns the most heinous crimes “into a fucking board game… a police procedural where there are heroes and villains and you’re rooting for people… That whole thing has turned these horrible, monstrous, atrocious things into just another kind of soap opera. That stuff is embarrassing for our culture.”
Despite this, Albini acknowledged his ability to freely band about offensive themes came from an ignorant and privileged position.
“That was an inexcusable choice that band made,” he said when asked about the band name Rapeman. “At the time, the internet wasn’t a thing yet, so you’d learn about things piecemeal. And one of the things that I learned about was the Japanese rape manga culture. I learned about it by having a friend of ours who worked in the import-export business who was sending us copies of these magazines of Rapeman comics… There were still prohibitions against depicting naked bodies, things like that, so a lot of things were done euphemistically. Because things weren’t permissible in an open way, they festered and became extremely weird.
“So you had these sort of rape fantasies being articulated as a superhero [comic], which is simultaneously utterly repellent and fascinating. That was the frame of mind that we were in when we chose that name.”
He stated that he was “was deaf to a lot of women’s issues at the time, and that’s on me. Within our circles, within the music scene, within the musical underground, a lot of cultural problems were deemed already solved. Meaning, you didn’t care if your friends were queer. Of course women had an equal place, an equal role to play in our circles. The music scene was broadly inclusive. So for us, we felt like those problems had been solved. And that was an ignorant perception.”
He then discussed the difference between actively taking part in discrimination and oppression and simply being part of a discriminatory society, saying: “That’s the way a lot of straight white guys think of the world – they think that it requires an active hatred on your part to be prejudiced, bigoted or to be a participant in white supremacy.
“The notion is that if you’re not actively doing something to oppress somebody, then you’re not part of the problem. As opposed to quietly enjoying all of the privilege that’s been bestowed on you by generations of this dominance.”
The post Steve Albini reflects on the “edgelord shit” he inspired, says naming a band Rapeman was “inexcusable” appeared first on Guitar.com | All Things Guitar.