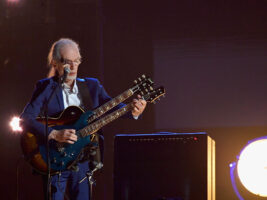 Yes legend Steve Howe has revealed that the guitar tone on the latest Yes album was mostly the product of a rather unlikely little amp: the Line 6 Spider.

Despite its less-than-boutique status in the gear world, the digital amp proved good enough to form the basis of the guitar tone on The Quest, the Yes album set to arrive on 1 October.
Speaking to MusicRadar, Howe was asked about the effects units and amps he used on the album, to which he replied: “I used the Boss GS-10 which is a remarkable little system. But for the most part, I was using a Line 6 Spider amp.” The GS-10 is a discontinued unit, featuring digital effects and amp modelling. It can connect directly to a DAW, and work as an all-in-one guitar recording solution.
However, Howe added that “Sometimes [the Line 6’s] speaker and mic helped give the song atmosphere.”
“The guitar solo on Leave Well Alone was done like that,” he added. “That was my Gibson ES-175 into the Line 6 Spider,” he added “It’s a case of exploring different options. One usually feels right. And that just might be because it is right!”
The post Steve Howe says most of the new Yes album was recorded on a Line 6 Spider appeared first on Guitar.com | All Things Guitar.