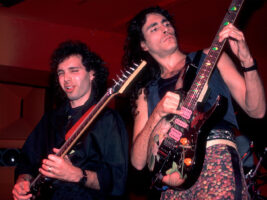 Steve Vai recalls studying under Joe Satriani as a youth: “I never felt as though I was going to run out of mentorship”

Steve Vai has reflected on studying under Joe Satriani as a youth and how those lessons inspired him musically from an early stage.

Speaking on the Striking A Chord podcast last Saturday (26 June), Vai said he began taking lessons from Satriani when he was 12 years old, doing so “religiously” on a weekly basis for about “three to four years”.
“When I was in Joe’s room, learning, I never felt as though I was going to run out of mentorship,” Vai said of Satriani’s tutelage.
“There was always this greatness about Joe that always seemed to surprise and delight,” he explained. “He was always teaching one new lesson after another, [and] just revealed a wealth of information and almost what seemed to me at a time infinite depth of musicality.”
Today, Vai is renowned for his virtuosic playing, which involves dexterous techniques such as his signature circular vibrato and his more recently developed “joint shifting” bends. Before his lessons with Satriani, however, he was far from the player he would grow to become, Vai said.
“I didn’t know anything. I mean, I was noodling around with a guitar in my bedroom before that, but I didn’t know what I was doing,” Vai said. “I was just playing by ear and I didn’t know how to keep the strings tuned.”
He continued: “In the beginning, it was basically like finger exercises and just things to kind of get my dexterity going, but it was very well-balanced. My lessons [with Joe] evolved very organically, he was an incredible teacher.”

The post Steve Vai recalls studying under Joe Satriani as a youth: “I never felt as though I was going to run out of mentorship” appeared first on Guitar.com | All Things Guitar.