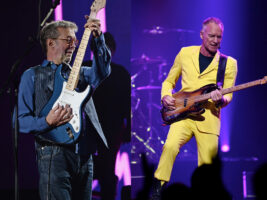 Sting “baffled” by Clapton’s vaccine-scepticism: “I’m old enough to remember kids with polio… that disease was eradicated overnight with the vaccine”

Ex-Police bassist Sting has said he doesn’t understand “the science” of Van Morrison and Eric Clapton’s rejection of requirements for vaccines at performance venues.

In a new interview with AFP, Sting is described as “baffled” by vaccine scepticism from the likes of Van Morrison and Eric Clapton. “I don’t really understand the science of the objection,” he says. “I had no hesitation in taking the vaccine. I’m old enough to remember kids in my street with polio who were crippled, and that disease was eradicated overnight with the vaccine.”
“Overnight” is hyperbole, however, vaccination has effectively rid most of the world of Polio – worldwide cases across the last few years number in the hundreds. The Americas, Europe and Africa have all been declared free of Polio thanks to vaccination efforts.
“I would like people to come to my shows to be vaccinated,” Sting added. “I’m not going to enforce it, but that’s my desire.”
At the moment, vaccine mandates are not law in England, however, a COVID-pass system is in place in Northern Ireland, Scotland and Wales. Some venues are implementing them anyway, using the NHS’ pass system.
Van Morrison and Eric Clapton have been vocal about their dislike of vaccine mandates, and instead have promoted “freedom of choice” – calling mandates “discrimination.” Clapton had previously vowed to not play at venues with a vaccine mandate, a vow he broke not long into his tour.
The UK population has, on the whole, opted to use their medical freedom in the recommended way, with 80 per cent of those over 12s double-vaccinated.
Elsewhere in the interview, Sting also discussed Brexit, calling it “a personal tragedy. I’m sad for my country. We knew it was going to be a disaster and we have to accept this, but I’m not happy.”
“Young British people have been robbed of the opportunity to experience Europe. It’s insane.”
The post Sting “baffled” by Clapton’s vaccine-scepticism: “I’m old enough to remember kids with polio… that disease was eradicated overnight with the vaccine” appeared first on Guitar.com | All Things Guitar.