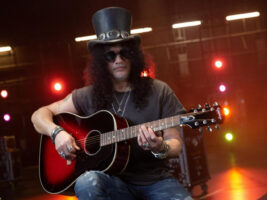 The Epiphone Slash Collection, which Slash himself teased back in January, is set to officially debut on 20 July. The series – a more affordable line of guitars based on the Gibson Slash Collection – includes include the Slash Les Paul Standard, Slash “Victoria” Les Paul Standard Goldtop and Slash J-45 acoustic guitar.
“Our new Epiphone Slash Collection brings our collaboration with Slash to the next level, expanding the offering of the iconic Slash models to Epiphone with an accessible price point,” said Cesar Gueikian, Brand President at Gibson.
He added: “Slash was intimately involved in every aspect of the development of his new Epiphone Collection, and we are all excited to see his fans around the world rock out with them!”
On the other signature instruments, Gibson has so far offered very scarce details (and no pictures yet), but revealed they’ll be out next month.
First off the line will be the Gibson USA Tony Iommi SG Special due out 17 August, followed by the Gibson Custom Shop Jerry Cantrell “Wino” Les Paul on 24 August, and Gibson Acoustic’s Nathaniel Rateliff LG-2 Western Acoustic in Vintage Sunburst on 31 August.
Gibson’s other announcements today (15 July) include a new Original’s Collection Non-Reverse Thunderbird bass guitar and the Gibson Custom Shop 1958 Korina Explorer and Flying V.
The post Summer NAMM 2021: Gibson confirms Epiphone Slash Collection, announces new Tony Iommi signature guitar appeared first on Guitar.com | All Things Guitar.