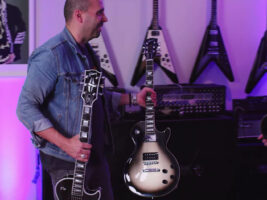 Summer NAMM 2021: Ahead of the show, Gibson has teased a new USA Standard version of Tool guitarist Adam Jones’ signature Les Paul, as well as a pair of limited-edition korina Murphy Lab guitars.

The tease of the new instruments was embedded in an episode of The Collection, a show which takes a look at the guitars of notable Gibson players. Previous episodes have covered the guitars of Joe Bonamassa, Brian Ray and Dweezil Zappa – however this week’s was a dive into the instruments of Gibson brand president Cesar Guiekian.
Across the episode, Mark Agnesi, Gueikian, Judas Priest’s Richie Faulkner and Megadeth’s Dave Mustaine – a recent addition to the Gibson family – all explore’s extensive collection of vintage and new Gibson guitars. Towards the end of the video, however, the group unboxes some new offerings from the brand – set to be available “this summer.” Presumably, more details will be forthcoming at Summer NAMM at the end of this week (15-17 July).
First up was a pair of Murphy Lab guitars – an Explorer and a Flying V, both korina. They are exacting replicas of 50s instruments, down to Brazilian rosewood fretboards. Notably, the Explorer’s body is made from a single piece of korina – a rare thing indeed – while the V is two pieces. They’ll also be incredibly limited runs, with only 81 Flying Vs and 19 Explorers being made for the range. Given this, and the incredibly premium construction specifications, prices are expected to be somewhat astronomical.
Image: Gibson via YouTube
Next up was a prototype model of the Adam Jones Silverburst Standard. This follows an eventful run of Custom Shop instruments last year, which featured two versions: an aged and signed version limited to a run of 79 and a VOS (vintage original spec) version limited to 179 units.
The original run was of Les Paul Customs, while this new prototype is of a Les Paul Standard, as you can see from its headstock design. It does still feature the ‘teardrop’ silverburst finish, rather than a ‘perimeter burst’ that’s more common on Les Paul Standards.
You can see the full episode below, with the Murphy Lab guitars making an appearance at around 50 minutes and the Adam Jones signature making an appearance at 1 hour and five minutes.

Be sure to stay tuned to Guitar.com for all the latest from Summer Namm 2021.
The post Summer NAMM 2021: Gibson teases USA Standard Adam Jones Les Paul, Murphy Lab Vs and Explorers appeared first on Guitar.com | All Things Guitar.