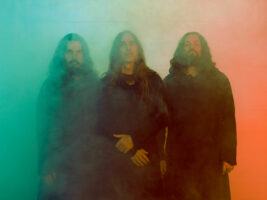 READ MORE: Hear Alice In Chains’ William DuVall and Sunn O)))’s Greg Anderson collaborate on new track We Who Walk In The Light

The session for Metta, Benevolence took place in October 2019, shortly after the band released their second album of that year, Pyroclasts. They had also just finished touring the UK. The session was recorded for DJ Mary Anne Hobbs’ show, and was broadcast on BBC 6 Music over Samhain, 2019.
The new live album features album artwork painted by Samantha Keeley Smith, who was also responsible for the gorgeous abstract covers of Pyroclasts and Life Metal.
A press statement from the band reads: “To enter the legendary John Peel studios was to enter a temple of music and experimentation, liberty in ideas and sound. The band was nearing the end of a long touring year around the Life Metal and Pyroclasts albums.
“Sunn O))) had developed the compositions extensively, embracing the formative concepts of the Life Metal album conceptually and emotionally, but actualised and evolved into vast, open and bright hypersaturated arrangements.”
For the UK tour, the band was joined by musician Anna Von Hausswolff. Hausswolff and her band appear on Metta, Benevolence, providing vocal and synthesizer layers atop Sunn O)))’s thunderous drones.
You can hear a preview of the album below.

Metta, Benevolence’s tracklist is below. It can be preordered over at Southern Lord for release on 26 November, with vinyl arriving early next year.