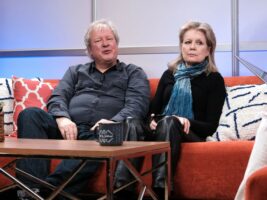 Talking Heads drummer Chris Frántz and bassist Tina Weymouth were involved in an accident with a drunk driver earlier this month.

Frántz revealed in a Facebook post today (27 March) that he was driving his vehicle on Post Road, U.S. Route 1 when it was “struck head on by a drunk driver who was driving on the wrong side of the road.”
Fortunately, the band members slash married couple were not critically hurt, though the accident left Weymouth with three fractured ribs and a fractured sternum.
“Incredibly, we walked away from the collision,” Frántz wrote, along with an uploaded image of their smashed car. He shared that Weymouth has been “in a lot of pain but she will get better with time. I give thanks to our guardian angels and to the Ford Motor Company for building a car that protected us from getting killed.”

Two weeks ago tonight I was driving on the Post Road , U.S. Route 1 with Tina Weymouth when we were struck head on by a…
Posted by Chris Frántz on Sunday, March 27, 2022

A representative for Weymouth also told Pitchfork that she was “a bit banged up in the accident but is resting and doing well. With the type of injury she had, rest is a key part of the recovery process. Chris is taking good care of her.”
Founded in 1975 by Chris Frántz, Tina Weymouth and David Byrne, Talking Heads is frequently credited for pioneering the New Wave genre. In 1977, band members Frántz and Weymouth got married and in 1980, the duo formed the band Tom Tom Club, which is known for their hit song Genius of Love. In 2002, the couple, as well as the rest of Talking Heads were inducted into the Rock and Roll Hall of Fame.
In other news, David Byrne is presently hosting a second Broadway run of his lauded American Utopia show. The show, which was supposed to start its second run in Manhattan last year, was forced to cancel dates at the end of 2021 due to COVID cases in the company.
Byrne has announced, however, that a modified version of the show will be returning to Broadway.
The post Talking Heads’ Chris Frántz and Tina Weymouth hit by drunk driver, currently recovering appeared first on Guitar.com | All Things Guitar.