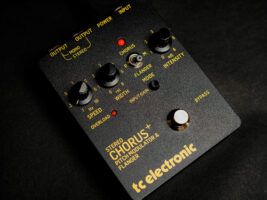 TC Electronic has reissued the first effects pedal it ever produced, the Stereo Chorus Flanger. The pedal was first introduced in 1976, as a lower-noise alternative to the other pedals on the market in the 70s.

The new reissue brings some minor updates to the pedal. The preamp stage is driven by a new, higher-headroom opamp, with better bass response. There’s also a modern 9V DC jack rather than the proprietary power requirements of the original. TC Electronic also increased the size of the power/LFO LED. Other than these changes, however, the pedal is effectively the same as the one launched in 1976.
TC Electronic’s product manager, Paul Robert Scott, explained the brand’s reasoning behind the small number of changes. “In one way it was an easy task, as there was actually very little to improve,” he said. “But in reality, of course, it was also a challenge. It was a fine balance between paying tribute and staying true, while upgrading specific aspects where new technologies made it possible to do so.”
The pedal has controls for speed, width, intensity and input gain, as well as a three-position mode switch. This selects between Chorus, Flanger and Pitch Modulation modes. The pedal has a mono input jack and a stereo pair of output jacks.
You can check the pedal out in TC Electronic’s launch video below.