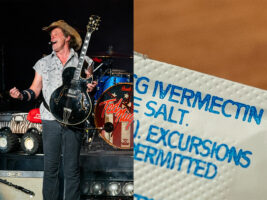 READ MORE: Ted Nugent says “There is no systemic racism. It’s a lie… We fixed that”

During an appearance on PBS’ Off The Record show, Nugent presented his experience with COVID-19, as well as his opinion that “the COVID-19 might be a weaponised virus created in Wuhan by Barack Obama, Nancy Pelosi and [Chief Medical Advisor to the President, Doctor Anthony] Fauci. How silly of me.”
“I got the Wuhan weaponised virus, and I survived quite nicely after a couple of days because I did what the government told me not to do, which is what I always do,” he said, before revealing that he took arthritis medicine hydroxychloroquine and parasitic worm medicine ivermectin to treat his bout with the virus, as well as his “healthy lifestyle, being clean and sober and eating venison.”
This, according to Nugent, gave him and his wife “the antibodies… we have a strengthened and fortified immune system against experimental shots.” Ironically, in his description of catching the virus and therefore being immune to the vaccine, Nugent has described the mechanism through which the vaccine actually works, albeit in reverse.
He then expanded on what he meant by an “experimental shot,” by citing a number of unfounded conspiracies. “It’s not a vaccine,” he said. “It’s an experimental shot. Now the FDA was forced to authorise it recently, but they were jabbing people with an experimental shot right up until that fake authorisation… I don’t believe it’s a vaccine. Most of America doesn’t believe it’s a vaccine.”
“The only ones that are taking it are either gullible or being forced because they’re gonna lose their job, lose their life and lose their livelihood,” he then claimed. At the moment, 56.5 per cent of the US population is fully vaccinated: over 186 million people.
When anchor Tim Skubick asked Nugent if he believed those million people are “just stupid,” Nugent replied simply: “Yup.” Nugent also bah’d like a sheep in an effort to “speak their language.”
It’s important to note that neither hydroxychloroquine nor ivermectin are recommended to treat COVID-19 by any health authority, US or otherwise. The FDA had begun testing hydroxychloroquine for treatment of hospitalised COVID-19 patients in June of 2020, however stopped doing so after clinical studies showed that it’s “unlikely to be effective for treatment of COVID-19.” In addition, “some serious side effects, such as irregular heartbeat, were reported.”
Those touring the efficiency of ivermectin have also been under scrutiny, as some people have taken dangerous amounts of the drug after purchasing veterinarian doses intended for horses. The drug is used in humans to treat some external parasites such as head lice, as well as infections caused by parasitic worms.
While the drug is being studied as a potential treatment by the University Of Oxford, Principle joint chief investigator Professor Richard Hobbs said it would be “premature” to recommend ivermectin as a treatment.
While the vaccine is not a treatment for COVID-19 once caught, those who catch the virus after being vaccinated are far less likely to be hospitalised.
Nugent isn’t the only rocker to voice anti-vaccine sentiment, however, his views are a little more extreme than those of Eric Clapton. Clapton appeared in a video interview earlier this year, recounting his experience with the side effects of the vaccine and expressing concerns about the vaccine’s impact on fertility. Vaccines in general have no effect on fertility, nor is there any theoretical mechanism through which they could.
The post Ted Nugent says he took parasitic worm medicine ivermectin to treat COVID-19, calls vaccinated Americans “stupid” appeared first on Guitar.com | All Things Guitar.