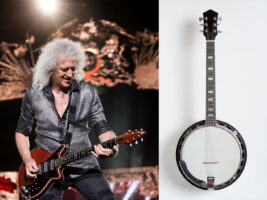 “That was the key to everything!”: Brian May explains how he made custom .008-gauge string sets with banjo strings

If you look into the many resources out there on nailing Brian May’s guitar tone, you might notice that alongside his classic red special guitar, treble booster and vox amplifier, May notably uses incredibly light guitar strings – with either an .008 or a .009 for the high E. However, he’s revealed that when he started playing those sets weren’t available – so some ingenuity was required.

Speaking to YouTuber Rick Beato in a follow-up interview to his deep-dive into Bohemian Rhapsody, the Queen guitarist explained how: “We didn’t have.008-gauge sets, the Fender and Gibson sets were all 010s or .011s or whatever, and that’s what I started off with.
“But then the rumour went around that if you went down to [music shop] Clifford Essex in Cambridge Circus you could get a banjo string you could put on your guitar.
“And that was the key to everything! Suddenly, you could move all your strings over and start bending strings. That was the most fantastic thing that happened to us as kids, watching Eric Clapton perform, thinking ‘that’s what he’s done, he’s been down to Clifford Essex, that’s why he can bend those strings!’”

May also explained that the extra flexibility in bending strings afforded by the lighter gauges meant that he could imitate James Burton’s bends on the solo to Ricky Nelson’s classic track Hello Mary Lou.
“Suddenly the [electric] guitar wasn’t a backing instrument anymore. I mean, I had heard Django Reinhardt, phenomenal, but he wasn’t bending the strings – it was like an amplified acoustic.”
The post “That was the key to everything!”: Brian May explains how he made custom .008-gauge string sets with banjo strings appeared first on Guitar.com | All Things Guitar.