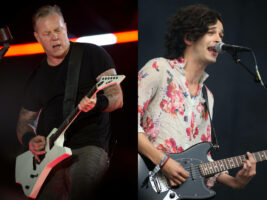 Matty Healy, the frontman of pop-rock outfit The 1975, has some choice words and hot takes about metal’s biggest act.

The notoriously loose-lipped Brit was speaking to Pitchfork when he revealed his adoration for Kate Bush and his disdain for Metallica, both of whom have enjoyed a resurgence in recent pop culture due to their inclusion in the Netflix hit show Stranger Things.
“I fucking hate Metallica,” Healy declared. “My worst band of all time.”
While Healy didn’t expand on what exactly it is about James Hetfield and the gang that grinds his gears, he has been pretty consistent at least in his dislike of the kings of metal. And as unpopular as the opinion might be, it’s not one you can chalk up to the artist’s lack of knowledge about the metal scene.
In a 2020 interview with The Face, Healy said, “I’ve always been a big metal fan. I was never into Metallica, I liked Slayer and bands like that. Stuff that I was into was bands like Converge, Glassjaw, the more post-hardcore kind of stuff.”
“I was super into Poison the Well and, I mean, Refused are probably my favorite heavy metal band of all time, that was a big deal for me. It was in the Despair collection, the AFI fan club, and all that kind of stuff.”
In other more Metallica-friendly news, the band recently announced that the 2022 edition of their annual ‘Helping Hands’ benefit concert will be taking place this December.
In an statement posted on Metallica’s website, the band wrote, “We’re excited to announce the date of our third Helping Hands Concert & Auction as we invite you to join us in Los Angeles on 16 December, 2022, for a very special show benefiting [Metallica’s charity foundation] All Within My Hands. It has been a few years since we connected in person for this unique event, so we want to get on your calendar now.”
The post The 1975’s Matty Healy says Metallica is his “Worst band of all time” appeared first on Guitar.com | All Things Guitar.