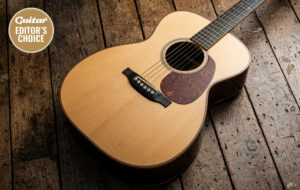 Since his humble beginnings in a one-man shop in 1977, Dana Bourgeois has garnered – and, more importantly, maintained – a reputation for making high-performance acoustic guitars based on iconic Martin designs, but with an in-depth approach to voicing that has come to define the Bourgeois sound. Now at the helm of a 20-strong team creating 400 instruments per year, Bourgeois is an established name catering to the acoustic connoisseur looking for something very special indeed.

READ MORE: The Big Review: Eastman’s AC722CE looks familiar but has a sound of its own

While Bourgeois offers guitars at a range of price points, this beautiful instrument, which purrs as we remove it from the snug TKL case, is a 000 DB Signature Deluxe model featuring top-end specs chosen by Dana himself. Lovers of Bourgeois guitars may well be familiar with the DB Signature line but this instrument turns things up a notch – it is the Deluxe model, after all!
The first thing we notice is that, with the exception of the celluloid pickguard, a barely-there ivoroid fretboard coach line, and the subtle use of bone for the fretboard inlays, bridge pins and side position markers, everything on the body of this guitar is made from wood – there are no plastic bindings or purfling here. Instead, this instrument is bound with outrageously figured Hawaiian koa which adds a deep chatoyance to the edges of the body, fingerboard and headstock. This is accompanied by two-tone herringbone soundboard purfling, and it’s an elegantly judged and balanced combination with neither feature distracting from the other.

Typical of vintage-meets-modern approach characteristic of Bourgeois, this guitar features a torrefied Adirondack spruce soundboard which is entirely hand-voiced. This is a particularly attractive slice of wood with beautiful winter-growth lines and just a touch of bear claw on the edges. A gentle tap behind the bridge reveals a lively sweet spot which bodes well.

The back and sides are made from Madagascar rosewood, often referred to as ‘Mad Rose’ by people who enjoy shortening things. This is a rare and desirable Dalbergia that should not be thought of as a substitute for Brazilian rosewood – we’re well past that now. Of note is the elegant set used for the back of the guitar, which is strongly figured with a flash of golden sapwood and neatly bisected and accentuated by Bourgeois’ signature marquetry back strip. It is a very good look.
The one-piece 14-fret mahogany neck is slim with a hint of a vintage V-carve and looks inviting from the shapely heel to the sharp volute. Tuning duties are taken care of by a set of gold Waverlys with snakewood buttons (but of course) and the nut and saddle are superbly shaped and polished bone.

In another marriage of vintage and modern construction techniques, the guitar was created using animal protein glue throughout and its high-gloss finish is Bourgeois’ super-thin Aged Tone cyanoacrylic formula, which replicates the response of an instrument after decades of playing. The back of the neck has a satin sheen for quick, squeak-free operation.
Although the body size is identical to an OM, this instrument features a shorter 25-inch scale length. Having experienced the magic of several vintage 000’s over the years we are expecting a slightly warmer and more complex voice but with the whip-crack response characteristic of a smaller soundboard than we’d find on a dreadnought or jumbo.

In use
000 models have traditionally found favour as instruments to accompany vocals and, with this in mind we kick off, with a light pick and some of the expensive open 9th chords beloved of the tasteful songwriter community. The results are frankly delicious. The guitar has a pleasingly immediate response and while on other instruments the combination of Adirondack over Mad Rose can often veer towards the spikier transient, in this case we get a silky attack that blooms into a long, smooth and very musical decay demanding just a touch of vibrato to bring out the overtones. To be honest, it’s pretty dreamy.

Digging in with the pick reveals both a lot of headroom and also a surprisingly wide dynamic range. There’s a magic to the notes when driven hard – a near perfect balance of focus and articulation with warmth and soul – and even the most gentle of strums sounds rich and characterful.
Dropping into Orkney tuning (CGDGCD) from a standing start can be a shock for any guitar but the Bourgeois takes the downward shift in its stride. There may not be the tectonic bass response of a C-tuned jumbo but what you get is far more useable. It’s an articulate and beautiful voice that responds immediately to a wide variety of hand positions and attacks. Very impressive.

Due to the scarcity of the woods used in this instrument, the quality of the build and the corresponding price-tag, the DB Signature Deluxe is unlikely to become a first choice acoustic for heavy touring. However, drawn in by its captivating acoustic voice, we set up a spaced pair of Gefell M300 mics to test its potential as a recording instrument. The results are superbly detailed and require no studio wizardry whatsoever in order to sound top-drawer.

In this golden age of acoustic-guitar-making there are several different schools of sonic excellence, from the orchestral textures of the Bay Area to the wild steel of Northumbria, and the Martin sound is by no means the final word in superlative acoustic performance. This instrument, however, is a ravishing example of that vintage Nazarene voice. Perhaps the final indication of just how engaging this instrument can be is that by the time we lovingly pack it up for its return to Coda Music, the strings are all but dead and we’ve written several new songs. It was a genuine pleasure.