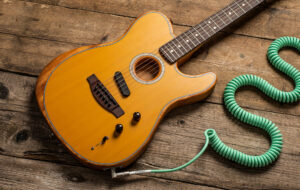 When the ‘affordable’ version of a guitar still has a suggested retail price of four figures, this tells you two things: it’s no ordinary plank, and you’re overdue a pay rise. We can’t help you with the latter, but we are expecting cool things from the Fender Acoustasonic Player Telecaster.

It’s been three years since the launch of the American Acoustasonic Tele, with Strat and Jazzmaster models following in turn. This is the first time Fender’s new acoustic/electric hybrid tech has filtered down to its main Mexican-made line, with manufacturing taking place at a new, dedicated facility in Ensenada.
Inevitably, this has involved sacrifices more significant than the loss of that ‘made in USA’ prestige: it’s a simpler instrument than the original, giving you fewer modelled guitars to choose from. But the basic tech is the same, with the Fender/Fishman-designed Acoustic Engine harnessing DSP to help it replicate a range of classic and not-so-classic tones.

First, though, let’s run through the Acoustasonic fundamentals for the benefit of anyone who couldn’t afford to be interested until now. These are true hybrids, each combining a classic Fender electric body shape (and skinny body) with hollow mahogany and Sitka spruce construction – and combining a magnetic pickup with an under-saddle piezo.
A patent-pending SIRS soundport gives the guitars just enough projection to make them heard above the crackling of a campfire; but with all due respect to camping holidays, it’s really the Acoustic Engine that makes these instruments useful. This is where the piezo sound is manipulated to emulate the tone of anything from a small-bodied picker to a big-strumming dreadnought.
Here come those compromises, though. While the American models each get five blendable pairs of sounds, here we only get three (don’t be fooled by the Strat-style selector switch). What’s more, only one of those pairs offers proper acoustic tones, the other two being dedicated to ‘lo-fi’ and electric options respectively.
Specifically, position three has ‘mahogany small body short scale’ at one end of the blend dial and ‘rosewood dreadnought’ at the other – so as you twist the knob you’re effectively making your virtual acoustic guitar bigger or smaller. Note that there’s no body sensor for creating percussive effects this time.

As seen on the Acoustasonic Jazzmaster, position two’s lo-fi sounds leave the raw piezo sound untreated. You might think that looks like sheer laziness on Fender’s part, but on the Jazzmaster it offers results that are, well, intriguingly unconventional. Here we get the same two variants – clean and crunchy – so the blend control is for dialling in overdrive.
Finally, position one is where this Telecaster uses its Telecaster pickup to emulate the sound of a Telecaster. Doesn’t sound too challenging, but the guitar’s construction and not-very-magnetic phosphor bronze strings mean it’s never going to sound exactly like a regular Tele – which isn’t necessarily a bad thing. Again you have blendable clean and overdriven options.
There are a couple more differences from the American range to note before we get going. Firstly, the bridge and fretboard are rosewood rather than ebony, which for our money is an improvement in aesthetic terms; and secondly, power comes not from a USB-rechargeable cell but from an old-school PP3 battery. The one installed in our test guitar isn’t even rechargeable, so we might just peel a sticker off Fender’s ‘eco-friendly achievements’ chart for that. Stated battery life is up to 22 hours.

In use
Dang, this thing is just so easy to play. First of all, at a little over 2kg it’s practically not there at all – we’ve played ukuleles that pulled down more on the shoulder – while the thinline body shape, complete with forearm chamfer, means it sits in the lap as snugly as any solidbody.
Best of all, though, is the neck. It’s pleasingly slim, with lightly rolled edges and a thin satin finish that really lets you feel the woodiness of the, er, wood. As a guitar to idly strum on while half-watching quiz shows, this is instant and effortless good fun.
And as with previous Acoustasonics, that’s matched by a perky unplugged tone that’s inevitably lacking in low-end power and warmth but has a raw, boxy charm of its own. It should do fine for that campfire singalong, as long as everyone doesn’t join in.

We begin our electric explorations by plugging straight into an audio interface and listening back over full-range monitors – which, apart from anything else, shows this hollow guitar to be handily feedback-resistant.
The small-body and dreadnought models give solid representations of the two ends of the acoustic guitar spectrum: one snappy and intimate, the other bloomy and spacious. You’re not going to encompass every conceivable sound by blending between the two, and there’s always a danger of a slightly synthetic piezo tonality entering the fray if your right hand strays too close to the bridge; but for any part-time acoustic player just looking to cover the main bases, this will do the job nicely. You also have the option to ‘natural things up’ when recording by using a mic to mix in some of the real sound of the guitar in the room.
And if you want to ‘unnatural things up’, simply flip over to lo-fi mode. The value of these unrefined piezo sounds when plugged straight into an interface or PA is debatable, but through an amp – especially an overdriven one – it’s a different matter. Don’t expect the voice of a standard electric guitar or an amped-up electro-acoustic here; the fact that it’s a bit like both but not really like either is the whole point.

The same can be said, to an extent, of the ‘electric’ sounds in position one. Now we’re using the Fender Noiseless Tele pickup… but while this brings us into more familiar territory, that doesn’t mean it suddenly sounds exactly like a ’69 Thinline Telecaster. Through an amp it’s tight and twangy at the clean end of the blend knob, leaning towards roughness as we dial in the crunch; but however you set it, the raspy looseness inherent in the guitar’s build is part of the deal – as are, we ought to mention, the relatively stiff 11-52 strings.
The launch of the Acoustasonic Player Telecaster feels like a no-brainer move for Fender, spreading the potential appeal of what is virtually a whole new category of guitar. Maybe swapping out the crunchy options for a couple more acoustic models would have made it even more useful, but this remains an appealing six-string multi-tool and a genuine problem-solver for many gigging players.