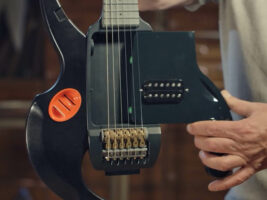 Do you remember the Boaz One? The conceptual modular guitar made waves back in 2019 when it smashed its $20,000 fundraising goal, raising over $450,000 across Kickstarter and Indiegogo – but in August 2022, no one who put money towards the campaign has received a guitar, despite an initial promise of a June 2020 delivery date. Furthermore, a second planned guitar from the same maker – a limited run of “pre-production prototypes” – has also gone AWOL too. So what happened? How did a project that broke its funding goal by more than 2,000 per cent seemingly evaporate into not one, but two pieces of vaporware?

The Boaz One is the brainchild of Boaz Elkayam, an Israeli luthier best known for his classical instruments. The concept goes back to the 1990s, but in the 2010s Elkayam’s company Boaz Innovative Stringed Instruments started work to bring the vision to life.
The guitar has two USPs: firstly, it’s design is modular, meaning you can quickly attach different body and pickup modules to the neck and bridge setup. Secondly, most of the guitar (the neck, body and even the frets) is made of a unique polycarbonate plastic – the full details of which Elkayam has kept under wraps. The Kickstarter page promises that this means there’s “no need for setups”, as “the durable plastic body of the Boaz One won’t change forms in varying conditions giving the plate a perfectly setup guitar at all times, saving you time and money!”
Almost 1,000 guitarists saw promise in the Boaz One. It raised $454,174 across its two crowdfunding campaigns, from a total of 908 backers. This smashed the goal of $20,000 by a huge margin – the total amount raised was 2271 per cent of the target. The Kickstarter campaign, which made up the vast majority of the funding, concluded on 28 September 2019.
Due to its modular nature, backers could choose between a range of packages, with various body and pickup modules offered in different combinations. For a single guitar, backers could pledge between $249 and $649, with the basic package coming with a single pickup module, an asymmetrical wing body and a bridge made of the unique plastic material. The premium package promised three pickup modules, a fuller body module and a brass bridge.
2020 Vision
The original timeline as posted to Kickstarter. Image: Boaz ISI via Kickstarter
Given that the Boaz One kickstarter concluded in September 2019, it was perhaps not surprising that the promised delivery date of June 2020 would be missed. Following the funding’s completion, Boaz Innovative Stringed Instruments began posting Kickstarter updates – written by team member Gordon Roberts. Some early updates informed backers of how the final design process was going, while others discussed more general topics. A CNC’d prototype arrived with Elkayam in January 2020, and in February, the team had CAD files ready to be turned into the moulds that would create the production guitars. A Kickstarter update from Gordon explained that “Although the guitars will be manufactured initially in Israel under Boaz’s supervision the moulds have to be made in China, there is simply no other economical option.”
However, as we’re now all too aware there might not have been a worse time to send designs off to begin manufacturing in China than February 2020. As soon as the scope of COVID-19’s impact on Chinese manufacturing became evident, an update on the Kickstarter page, written by Roberts, told backers: “I’m afraid that our goal of delivery in June may not be a realistic one anymore and every day that this crisis continues pushes our delivery date a little further out.” This was before COVID-19 was officially declared a global pandemic – but its potential impact on Chinese manufacturing was becoming clearer and clearer. The potential disruption to the Boaz One was huge: without moulds, guitars would need to be cut on a CNC machine, which wasn’t viable given the prices that the instruments were offered to backers at.
From then until summer 2020, updates charted the difficult process of getting the guitar’s moulds manufactured throughout global supply chain issues and varying levels of economic shutdown. The creation of the moulds was split into three stages to keep track of things:

T1: The moulds are created, and sent to Boaz for approval and tweaks.
T2: After these tweaks, the moulds are capable of creating functional instruments.
T3: The final polishing and hardening has happened to the moulds, and they can now create the backer guitars.