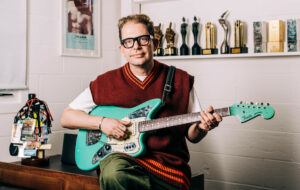 Jamie Oborne is the founder and owner of Dirty Hit, the British independent record label home to some of the hottest guitar acts on the planet, including The 1975, Beabadoobee and recent Brit Award winners Wolf Alice. Though his career as an artist manager and label chief has been immensely successful, Oborne still finds the time to indulge his passion for guitars – and many of his instruments find their way into the hands of Dirty Hit artists.
The selection of battered guitar cases that Jamie has brought to his London office today represents the tip of an enviable iceberg. “I don’t need this many guitars, obviously,” he admits. “But I do have a bit of a problem…”

READ MORE: Methyl Ethel rediscover adventure on their latest LP, Are You Haunted?