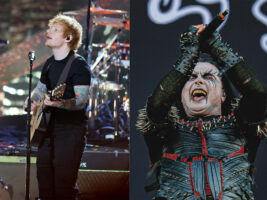 Rumours have begun to speculate that the long-awaited collaboration between metal band Cradle Of Filth and pop musician Ed Sheeran is complete.

Sheeran had stated he wouldn’t be opposed to making a metal record way back in 2021, and even took part in a surprising collaboration with UK metal giants Bring Me The Horizon at the Brit Awards in early 2022.
Fast forward several months, and in August earlier this year Cradle Of Filth frontman Dani Filth had confirmed that a collaboration with the Shape Of You singer was on the way.
Now, people are beginning to question if the project is complete following a post on social media shared by the metal frontman. Filth shared a picture which showed him having what could be a celebratory pint in a pub with Sheeran, and wrote in the caption, “A little over a week ago I was having lunch with the unlikely lads, having just done something fun.”

A little over a week ago I was having lunch with the unlikely lads, having just done something fun. Ed Sheeran
Posted by Dani Filth on Thursday, December 22, 2022

It is yet to be confirmed exactly when the result of “something fun” will be released, and we do know there have been a few setbacks during the process.
Speaking to Knotfest back in the summer, Filth said: “We still have yet to finish our song with Ed Sheeran. He’s done some of it, but then he had a baby, and then he got obviously sidetracked with that and doing whatever Ed does, which is play massive shows around the globe. He’s not at our beck and call.” He continued, “But he is gonna finish it, he assures me. Actually, I spoke to him quite recently.”
Given this new snap was taken “over a week ago”, fans are hoping the new song could be with us soon.
Ed Sheeran is set to tour in 2023, you can get tickets at edsheeran.com.
The post The Ed Sheeran and Cradle Of Filth collab appears to be complete appeared first on Guitar.com | All Things Guitar.