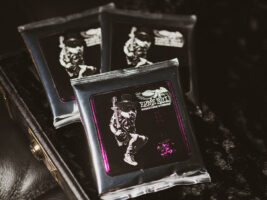 The Ernie Ball Slash signature strings are “back by popular demand”

Ernie Ball has announced the return of its signature strings for Guns N’ Roses guitarist Slash. The limited-edition strings were first launched at the end of last year.

The strings themselves are Slash’s preferred 11-48 gauges – 11, 14, 18, 28, 38 and 48, to be specific. The wound strings also feature Ernie Ball’s Paradigm core and plasma-enhanced nickel-plated steel wrap wire. The wrap has been given Ernie Ball’s “Everlast nano treatment,” which the brand says gives “unprecedented repellency of oils, sweat and build-up.”
The strings also have brass wire reinforcements at the ball end for more stability, preventing slippage within your tailpiece of choice, as well as warding off breakage for longer at that notoriously vulnerable point. The strings come in a “highly-collectable” tin box of three packs, with special Slash graphics.
Image: Ernie Ball
The Ernie Ball Music Man brand has been a little more active than Ernie Ball recently, with new colours for its Axis range and a new version of its St Vincent signature. Ernie Ball has, however, recently launched its Volt power supply. The compact unit provides four dedicated and isolated power sockets for pedals, and can also chain into another Volt for bigger power supplies.
The relaunched Slash signature strings have the same price as the original, listing for $34.99 a box. Find out more over at ernieball.com.
The post The Ernie Ball Slash signature strings are “back by popular demand” appeared first on Guitar.com | All Things Guitar. 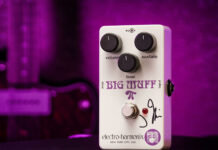 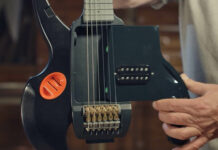