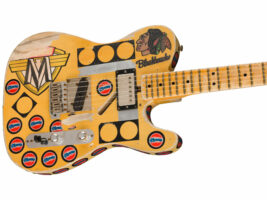 The Fender Custom Shop has introduced a new limited-edition Telecaster, based on the guitar played by Chicago’s Terry Kath.

Kath’s main Telecaster was heavily modified and completely covered in stickers. It featured a guitar tremolo with a sawed-off Telecaster guitar bridge plate, a humbucking neck pickup, custom body routes, a reverse control plate, custom tuning machines and three ‘wing’ string trees. All of these appointments have been recreated for the Custom Shop version.
Kath’s Daughter, Michelle Kath Sinclair, explained that: “This moment has been a long time coming. When we were making the documentary about my dad [2016’s Chicago: The Terry Kath Experience], we didn’t know where the guitar was, so the film almost became a hunt for this Telecaster. We finally found it at my grandpa’s house; he labelled all of the guitar cases and this one said ‘Terry’s Favourite.’ Finding this guitar meant everything to me, because it feels like I have a piece of him with me that’s so iconic.”
Mike Lewis, Fender Custom Shop’s vice president of product development, said of Kath and the guitar: “Terry Kath is one of the most incredible guitar players that ever lived. His iconic playing style paved the way for many guitar players and has inspired other legends through the years.
Kath playing the original. Image: David Redfern
“When his daughter, Michelle, told us they wanted to entrust the Fender Custom Shop to recreate Kath’s famed, fan favourite Telecaster guitar from Chicago, we were honoured. Fans had been making their own versions of this guitar for years, but this time master builder Dennis Galuszka replicated every single detail – from the synchronised Strat guitar tremolo with sawed off Tele bridge plate to other custom elements of the body adorned with stickers and other personalised touches.”
The guitar features a heavy relic ‘52-style ash Telecaster body in aged vintage white with a lacquer finish; chrome and nickel hardware; a custom ‘67 Telecaster maple neck with 21 frets and a 7.25-inch fretboard radius, alongside all of Kath’s custom appointments. It lists for $20,000 / €20,999 / £17,999.