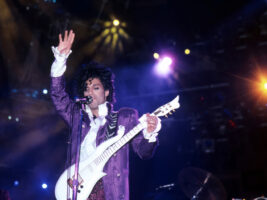 The Genius Of… Purple Rain by Prince and The Revolution

“Dearly beloved, we are gathered here today to get through this thing called life.” Exclaims Prince in the sermon that begins Let’s Go Crazy, the opening cut of his momentous sixth studio record. It’s a statement that affirms Purple Rain’s intentions outright – this is a nine-track document of a life’s adventure, a eulogy for lost loves and paths not taken, and an artistic venture intended to make sense of an extraordinary, near-supernatural metamorphosis from humble beginnings up to the very pinnacle of pop supremacy. With Purple Rain, Prince was both reflecting – and putting his foot harder on the accelerator pedal – on his journey towards pop cultural demigod.

READ MORE: The Genius Of… If You’re Feeling Sinister by Belle and Sebastian

Released ahead of a capably made semi-autobiographical movie of the same name (starring Prince as ‘The Kid’), Purple Rain seized the public consciousness like no other Prince album before it. It could even be said, that the Purple Rain era achieved a level of mixed media penetration not seen since the era of The Beatles, with both film and album sitting pretty at the top of their respective charts, and the man himself revelling in an immense celebrity.
The true power of Purple Rain lay in the vitality of its songwriting, as well as the many off-the-wall production choices – with Prince and his band, The Revolution, displaying an abject disregard for instrumental conventions, blurring any attempt at defining their music by shading arrangements with elements of R&B, pop, heavy rock, country, classical and even proto-hip-hop, all swirling together in one sonic cauldron. It’s testament to Prince and his band, the Revolution’s finesse, that these disparate elements came together so well.
Prince had already proved himself an exceptional guitarist, but in Purple Rain’s jubilant context, the smoldering power of his passion-led soloing entranced all, and mirrored the transformative through-line of the album’s theme. From the darting uncertainty of the carousel thrill of Let’s Go Crazy, via the hurricane of fiery fuzz at the core of The Beautiful Ones, the Western-like, ‘arrival’ cue that introduces the majestic When Doves Cry, to that monumental, tear-jerking solo at the album’s grand finale – a masterclass in lead guitar is delivered, with Prince’s deep understanding of dynamics informing his more flamboyant fret-flights by tactfully restraining himself elsewhere.

This is what it sounds like
Like many artists, Prince’s gradual ascent to success had been slow, turbulent and marked by unrealised expectations. From a young age, the Minneapolis-born Prince Rogers Nelson’ parents (who would divorce when he was aged ten) instilled in him the value of music, particularly his jazz musician father, John Lewis Nelson who bestowed his own stage name, Prince, upon the child. Developing into a capable musician and songwriter, Prince’s early output – across the four albums; For You, Prince. Dirty Mind and Controversy – had found him erratically attempting to carve out a distinct musical niche, with mixed results. For those tuned into Prince’s expanding sound palette however, the development from the precarious funk/R&B of early tracks such as For You’s Baby to the much more innovative track construction that peppered Dirty Mind and Controversy was a strong indicator that this was a prolific, original writer who was continually striving to better himself.
Prince’s fifth album, the sprawling 1999 was his first major success, peaking at No. 9 on the Billboard chart. It also marked the moment when Prince stopped trying to painstakingly control every millisecond of sound in the studio, as he had been before. Guitarist Dez Dickerson (who left Prince’s band ahead of work on Purple Rain beginning), remembered that “He did everything himself at the beginning – that’s what Warner Brothers signed, this teen wunderkind, the next Stevie Wonder. But he also wanted to have a band, and we spent so much time rehearsing and jamming, that he felt comfortable moving away from that do-everything-yourself template.” Dickerson related to the Chicago Tribune.
Building on the success that 1999 had afforded – particularly by its trailblazing singles 1999 and Little Red Corvette –  Prince set his sights on a much grander project, with his cabal of fixed musicians now defined as ‘The Revolution’. This line-up of instrumentalists included Matt Fink on synths, Brown Mark on bass, Bobby Z on drums, Lisa Coleman on keys and, filling the vacant guitarist role, Coleman’s girlfriend Wendy Melvoin. “None of us were the virtuosos that he had towards the end of his life.” Melvoin reflected with Billboard. “We were the musicians that would play one note and one note well. We became the freight train, which makes for a better band, and he could feel safe knowing we were happy to give him exactly what he wanted from each of us.”
To realise his audacious next step, Prince and the Revolution constructed a soundstage and recording studio in a warehouse on Highway 7 in Minneapolis’ suburb, St Louis Park. With the success of 1999 (and a deft feat of negotiation with his management) spurring Prince to put into motion work on the film he’d always itched to make. “I really wanted to chronicle the life I was living at the time, which was in an area that had a lot of great talent and a lot of rivalries. So I wanted to chronicle that vibe of my life.” Prince remembered in an interview with Larry King.

For more reviews, click here.
The post The Genius Of… Purple Rain by Prince and The Revolution appeared first on Guitar.com | All Things Guitar.