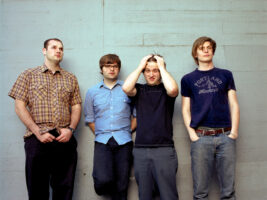 During the opening half-decade of the 21st century, a collision of off-kilter indie rock married with irresistible pop hooks had invaded America’s psyche. Ever since The Strokes’ Is This It re-ignited indie’s furnace as a potentially commercially viable genre in 2001, a growing number of bands who’d previously been operating at the margins of acceptability suddenly found themselves hot-footing it up album charts and festival billings.

Though the no-frills, DIY ethos of The Strokes and The White Stripes had sparked this new era, the flung-open gates had also allowed in a motley crew of dishevelled, slightly bohemian, folksy outsiders. Suddenly thrust into the limelight by hordes of guitar band-hungry disc-buyers, these former outcasts re-worked their formerly lo-fi sound to court a wider listenership, and songs by the likes of Arcade Fire, Modest Mouse and Interpol were inescapable by the mid-2000s.
It’s in this context that Death Cab For Cutie’s trajectory from rickety indie solo project, to The O.C.-soundtracking indie-pop heavyweights is best understood. Originating back in the small town of Bellingham, Washington, principal songwriter Ben Gibbard grew tired of his previous role (as guitarist for local band Pinwheel) and decided to forge a new vehicle for his own songwriting. “When I was younger, music took every moment of my life.” The music-obsessed Gibbard recounted to NPR’s World Cafe, “I was thinking about it, I was listening to it, when I was writing something, I would walk away from it and still be thinking about it. It was very difficult to remove myself and get some distance and some perspective.”
Gibbard’s new creative mothership was dubbed ‘Death Cab for Cutie’ – a nod to the Elvis pastiche that a terrifying Bonzo Dog Doo-Dah Band performed at the end of The Beatles’ Magical Mystery Tour – Gibbard soon expanded his project into a full band, enlisting fellow Western Washington University students Chris Walla, Nick Harmer and Nathan Good on guitar, bass and drums respectively.

The sound of settling
Released in 1998, Death Cab’s debut Something About Airplanes was put out by independent Seattle label Barsuk Records. Instead of recording in a studio, the band’s material was thinly tracked and produced by Chris Walla at home with a vintage eight-track Tascam 80-8 reel-to-reel. It was a shaky debut, but it bore evidence of the band’s latent talents, particularly Gibbard’s aptitude for striking lyricism coalescing with Walla’s considered application of sweet guitar hooks. Follow-up We Have The Facts and We’re Voting Yes continued to solidify the band’s sound, and was soon considered by many in-the-know to be the troupe’s first bona-fide classic. Albeit, one that very few people heard at the time.
By 2001, Death Cab had undergone several key changes, particularly the addition of Jason McGerr on percussion after the departure of Nathan Good (and his replacement Michael Schorr), following third record The Photo Album. By this point, the group had settled into an effective musical niche, with emotive guitar, piano and lyricism at its centre, with only occasional forays into the type of distorted heavy rock that many of their indie rock peers leaned on. The Photo Album certainly sounded more refined than previous work, with Walla’s aptitude for production strengthened following the founding of his Seattle-based ‘Hall of Justice’ recording studios. Though singles A Movie Script Ending and We Laugh Indoors hadn’t really made a dent on the charts – or the public consciousness – the album’s sound and moderate success dictated the path ahead. They were on a path to the record that would provide Death Cab with the leg up they were now clearly ready for.

For more reviews, click here.
The post The Genius Of… Transatlanticism by Death Cab for Cutie appeared first on Guitar.com | All Things Guitar.