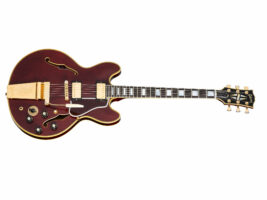 READ MORE: Nelly has been cast as Chuck Berry in Buddy Holly Biopic

The guitar features an all-maple body construction with red spruce bracing and bound F-holes. Binding is single-ply for the fretboard and F-holes, five-ply for the headstock, three-ply for the back and seven-ply for the top of the body.
The three-piece maple neck is topped with an Ebony fretboard and custom inlays, 22 frets and a 24.75-inch scale length. The neck’s profile has been matched to the original, and there’s a headstock volute for ultimate historical accuracy.
The pickups are a pair of Gibson 68 Custombucker Alnico 5 humbuckers, voiced for classic PAF clarity and resonance. These run through a volume and a tone pot each, as well as a six-position Varitone switch for some extra versatility.
The guitar’s aged-hold hardware includes a maestro vibrola tailpiece, a tune-o-matic bridge and Grover keystone tuners.
Gibson writes of the instrument and Berry’s legacy: “Chuck Berry was a founding father of rock and roll. His stagecraft and musicianship laid the foundation for nearly every genre of rock and popular music. His playing, showmanship, and catalogue of music helped launch many musicians’ careers, and countless sidemen shared the stage with him. So did his trusted Gibson guitars.”
The recreation is limited to 100 instruments, each hand-built and aged by the Gibson Custom Shop and the Murphy Lab respectively. Each guitar comes with a custom 1970s-style ES-335 case with red lining and a certificate of authenticity.
The Chuck Berry 1970s ES-355 will set you back $6,999. Find out more at gibson.com.
The post The Gibson Custom Shop releases a replica of Chuck Berry’s 1978 Wine Red ES-355 appeared first on Guitar.com | All Things Guitar.