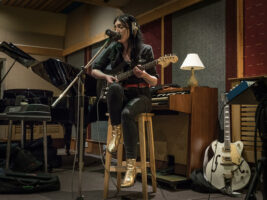 The Guitarist’s Guide To Boosting Your Creativity

In an era when the musical instrument market is awash with ever more impressive sonic options, it’s tempting to assume that the process of creating music is getting easier. Not so. While technological advances certainly expand the range of sounds on offer, the whole process of writing and composing new music that is unique, brave, revelatory and beautiful remains as challenging and elusive as ever.

READ MORE: A New Way To Play: Meet the guitarists who are taking over TikTok