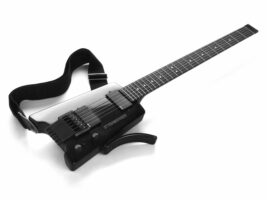 The intriguing history of Steinberger guitars

Set up in 1979, Steinberger introduced a new look and new functionality to the music industry. While the headless design of its guitars is rightly the company’s most well known and visually striking feature, its innovative ideas didn’t end there.

Founder Ned Steinberger is the son of Nobel Prize-winning particle physicist Jack Steinberger. Back in the 1970s, Ned was not a musician, he was a furniture-maker, who still holds several patents for chair designs. His first foray into musical instrument making came with the Spector NS2 bass guitar, designed alongside luthier Stuart Spector. It wasn’t until 1976 that Ned started tinkering with his own unorthodox designs.
Between 1979 and 1986, Ned brought those designs to life. His guitars featured a unique minimalistic shape and, in the beginning, were constructed entirely of a synthetic fusion of glass fiber and carbon fiber, known as the Steinberger Blend. Most guitars are made of wood, a biological agent that is subject to variation, even within the same species of tree.
Ned Steinberger
That variation is something we enjoy and, as guitar builders, we can use it to our benefit in fine-tuning the tonal properties of an instrument. Steinberger’s graphite carbon fiber blend, however, offered more consistency and sustainability, as it was not susceptible to the ebb and flow that comes with changing humidity and temperature levels. In later years, though, Ned’s designs would begin to incorporate wood as well.
Steinberger made five models over the years – Series P, S, M, K and Q – and typically each would constitute a line of guitars and bass guitars. And, of course, most of them were headless. The S-Series instruments, however, did have headstocks. But this was Steinberger’s rarest, with only about 300 being made.
Steinberger GL2
Steinberger did not invent the headless guitar. Les Paul made one in the 1940s, using a similar design wherein the strings are anchored at the nut and tuned at the bridge. Les Paul’s guitar, however, was made of aluminum. He could never get it to stay in tune and intonate properly, so he never marketed it. Decades later, Steinberger would remedy this issue with its ‘straight-pull’ tuning mechanism, as well as its Double-Ball Calibrated strings, which didn’t need to be cut.
Of the dozens of guitar-design patents held by Ned Steinberger, most of them are focused on improving tuning stability. In 1984, Steinberger developed the TransTrem, a unique vibrato bridge. On a standard vibrato, the strings are stretched at different rates, but the TransTrem allows for the pitch of entire chords to be raised and lowered together. The TransTrem can also be locked, which allows it to essentially function as a capo too. The drawback is that the bridge requires those double-balled calibrated strings – which are made only by a few companies, including D’Addario, La Bella, and Steinberger itself. The TransTrem idea was later replicated by other companies, with varying success. The Washburn Wonderbar, for example, was developed to function the same way but uses standard strings, and features no lock function. More recently, the EverTune Bridge was designed to work in a similar fashion.
Steinberger L2
These ideas were patented under the Steinberger banner but the patent on the TransTrem has since lapsed, and Steinberger was bought by Gibson in 1986. The sale to Gibson allowed Ned to return his focus to the design of instruments, rather than their business dealings and production. Ned remained involved with the production of Steinberger guitars under Gibson’s ownership, and even aided in the design of the Synapse line – guitars and basses produced by Gibson and made of wood.
Eventually, Ned left Gibson and Steinberger behind to design and build his own instruments. But since Gibson owned the company label – his surname – Ned was no longer able to make guitars under his own designation. So in 1990, he began building instruments under the NS Design banner – violins, violas, cellos, omni basses, upright basses, bass guitars, nothing was off limits. NS Design still produces instruments today, just not the headless guitars that Ned is most famous for.
Steinberger L2
Meanwhile, Gibson stopped production of Steinberger guitars in 1998. It started making them again later but did not follow the original design. Grasping for a more cost-effective way of making these unusual instruments, Gibson began building the guitars out of wood in South Korea instead.
Steinberger guitars and their advancements of the instrument developed a cult following, and were used by artists such as Mark Knopfler, David Bowie, Eddie Van Halen, Jerry Garcia, Lou Reed, David Gilmour, Sting, Geddy Lee, and Allan Holdsworth. The first three prototypes of the L2 bass were sold to John Entwistle, Tony Levin, and Andy West of The Dregs. Though these instruments are no longer in production, Steinberger guitars hold a creative legacy that still resonates to this day.
For more on current Steinberger guitar models, visit steinberger.com. Check out NS Designs at thinkns.com.
The post The intriguing history of Steinberger guitars appeared first on Guitar.com | All Things Guitar.