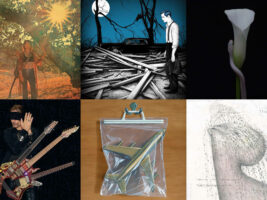 The most anticipated guitar albums of 2022

2021 was an exceptional year for new music, with so many artists taking advantage of the enforced pandemic downtime of 2020 to focus on making new and exciting albums for us to enjoy.

READ MORE: The Best Guitar Albums Of The Year 2021

That trend shows no signs of slowing down, however, and already 2022 is looking like it could be another fantastic year for guitar music. While we’re sure there are plenty of amazing albums for 2022 that aren’t even on the radar yet, here are 10 that we already know about that have us very excited indeed…
Steve Vai – Inviolate

It’s a testament to Steve Vai’s enthusiasm for guitar that 40 years into his career he’s still finding interesting new ways to explore the instrument. New album Inviolate, his first in six years, is a testament to that, with the shred god inventing new techniques and even creating a triple-necked steampunk guitar dubbed ‘The Hydra’ to help realise his musical vision. Strap in.
Black Country, New Road – Ants From Up There

Black Country, New Road’s debut album, For The First Time established the experimental rockers as one of the most exciting and interesting acts on the UK music scene, and barely 12 months later their follow-up promises 10 more tracks of thrillingly inventive avant garde rock epitomised by lead single Chaos Space Marine.

The Mercury Prize-winning indie-rockers are returning with their first new album in four years in February, with singles U&ME and Get Better showcasing a more guitar heavy sound borne of Joe Newman spending lockdown going down a lockdown guitar-buying rabbithole. “It’s very different,” he told Guitar.com of the album recently, “It’s dark, and there’s a lot more exploration in the guitar work.”

It’s no exaggeration to say that Molly Tuttle is one of the most jaw-droppingly brilliant guitarists on earth, and her debut album with new all-star bluegrass backing band Golden Highway looks set to be an exciting and exhilarating listen. If you need any proof, just check out She’ll Change, which sees Tuttle’s blistering flat-picking chops go toe to toe with the incendiary playing of banjoist Kyle Tuttle and mandolinist Dominick Leslie… and be ready for your jaw to hit the floor.

It’s been over five years since Tosin Abasi last released an album, as the guitarist has busied himself with the small matter of creating his own hugely successful but boundary-pushing guitar company in Abasi Concepts. March 2022 will see Animals As Leaders finally return to lay waste to the instrumental guitar world once more, certainly if the jaw-dropping first single The Problem Of Other Minds is anything to go by.

Midlake – For the Sake of Bethel Woods

The Texan folk-rockers have never been ones to rush things, but the nearly nine-year wait for a a second album since the departure of frontman Tim Smith had led many to wonder if it would ever happen at all. But in 2019 the band came back together after pursuing various other projects, with a communal desire to recapture what had been lost. Lead single Meanwhile… is a glorious fusion of the varied genres and moods the band has explored over the years – this promises to be a real treat for fans.

Image: John Medina / Getty
Rivers Cuomo hasn’t showed much interest in self-editing in the last few years, and so we should perhaps not be surprised that next project SZNS (‘Seasons’) will see the band release four albums, one for each season, over the course of 2022. Quite what will come of it remains to be seen, but the promise of Winter channeling Elliot Smith and other 90s singer-songwriters should prick up the ears of fans harking for a return to the bleak, raw, confessional spirit of all-time classic Pinkerton.
Ozzy Osbourne – TBA

Singer Ozzy Osbourne performs onstage at the 10th Annual MusiCares MAP Fund Concert to raise funds for MusiCares’ addiction recovery resources at Club Nokia on May 12, 2014 in Los Angeles, California. Image: Kevin Winter/WireImage
While the Prince Of Darkness’ follow up to 2020’s critically acclaimed Ordinary Man has not yet been officially announced, it’s expected to come out in the first quarter of 2022, and judging by the all-star cast Ozzy has recruited to help out, we’re excited. The headline news is that Zakk Wylde is back in the fold for the first time since 2007, but with Eric Clapton, Tony Iommi and Jeff Beck all also slated to appear, we could be in for a real treat.
Jack White – Fear Of The Dawn/Entering Heaven Alive

For the last few years Jack White has focussed his efforts on other projects, most notably for us a load of brilliantly inventive signature effects pedals with various boutique brands. 2022 however sees the former White Stripes man return with not one but two solo LPs – his first since 2018’s Boarding House Reach. If teaser Taking Me Back is anything to go by, we can expect a double helping of gloriously glitchy, fuzzy goodness in April and July respectively.

There’s very little info on what Sheffield’s finest might look like following on from 2018’s polarising stylistic left turn on Tranquility Base Hotel & Casino. What we do know is that the band began recording new material in early 2021 and that the new album is tentatively due this summer. As for what it will sound like, drummer Matt Helders told BBC Radio 5 Live that, “We tend to always move it on a little bit,” from the sound of the previous album they’ve done – quite what that means is anyone’s guess at this point.
For more features, click here.
The post The most anticipated guitar albums of 2022 appeared first on Guitar.com | All Things Guitar.