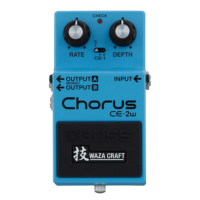 It’s been a studio staple since the 70s, but the chorus effect is seriously back in vogue. Dan Orkin looks at a 10-strong choir of the most popular chorus pedals on Reverb.com…
In this month’s instalment of our ongoing exploration of the most popular pedals on the guitar gear market, we’re taking a look at chorus. Pedal-based chorus effects date back to the mid 1970s and function (in short) by duplicating an audio signal and delaying, or otherwise modulating, the duplicate before recombining it with the source signal for the final output. The doubled signal is often modulated with an LFO, endowing the final sound with motion similar to that of a flanger or phase shifter.
Chorus is having something of a moment right now, riding a sonic wave that goes back at least three or four years. Much in the way that synthesisers have come to dominate pop-music radio, it’s chorus – arguably the most ‘80s’ of effects – that has found favour among a sweeping range of contemporary hitmakers.
However, chorus never really went away. While many might first think of Robert Smith or Andy Summers and the hits of new-wave radio, Kurt Cobain and a legion of grunge acolytes were equally enamoured with the watery sound. I
f you look even further back to the late 1960s, Uni-Vibe pedals – which were designed to emulate a rotating speaker cabinet but have a chorus-like sound – were used by Jimi Hendrix and plenty of other icons. Companies such as Boss (the inventor of modern chorus) have never stopped producing chorus pedals, and today’s market is replete with new and used options as a result.
Seen something you need to add to your pedalboard? Head to Reverb.com and pick up one for yourself!1. Walrus Audio Julia Chorus/Vibrato
Walrus Audio scored a major hit with the release of the Julia, a combination of chorus and vibrato effects, which was released a couple of years ago. The circuit is augmented by supremely flexible LFO controls, which vastly broaden the potential for modulation, offering a unique suite of effects beyond the standard sheen of an 80s-style, Boss-like chorus.2. DigiTech Luxe Anti-Chorus Polyphonic Detune
The Luxe isn’t exactly a chorus pedal in the traditional sense; in fact, DigiTech even goes so far as to market the device as an “anti-chorus” pedal. It functions by detuning the input signal from the guitar, in much the same way as the popular DigiTech Whammy series does. The effect, though, is unmistakably chorus-like in its tonal thickening – just with a little less modulation than you’d get from a standard circuit.3. MXR M234 Analog Chorus
An all-analogue, bucket-brigade-based pedal, the MXR M234 Analog Chorus is a great option for anyone seeking classic, organic chorus tones. It adds a few tone-shaping tools to the package, too, like high and low filters to contour the flavour of its tone with a bit more granularity than some other analogue options on the list.4. Boss CH-1 Super Chorus
While similar in format to other Boss-made chorus pedals, the CH-1 offers a tonal range that’s a bit wider overall. This pedal has been in production since 1989 and continues to be a strong seller, despite an increasing number of companies producing new and more adventurous spins on the classic chorus template.5. Boss CE-2W Chorus Waza Craft
Part of Boss’ Waza Craft series, the Boss CE-2W is a fantastic option for anyone who wants to make a beeline for the classic chorus tones of the 80s. The CE-2W allows players to summon the circuits of the original CE-2 and CE-1 chorus pedals, and also features a vintage vibrato mode.6. Electro-Harmonix Small Clone Full Chorus
The Small Clone is EHX’s straight-ahead chorus option. Most closely associated with the guitar sound of Nevermind-era Kurt Cobain, the Small Clone comes in a few different-sized variants, including the pedalboard-friendly Nano Clone.7. Danelectro Cool Cat
An extremely affordable chorus option, the Danelectro Cool Cat is a two-knob machine with few frills – but for many players, that’s a good thing. While no longer in production, these pedals still sell regularly on the used market, often with a sub-£20 price tag.8. TC Electronic Corona
Similar in format to other popular TC Electronic pedals such as the Hall Of Fame Reverb, the Corona Chorus is a supremely versatile pedal that can cover just about any chorus tone you can dream up. Like other TC pedals, it also has a nifty ‘TonePrint’ function that lets you beam in artist-based presets via your smartphone.9. MXR M68 Uni-Vibe
While technically a Uni-Vibe (a similar, though distinct, effects class), the M68 from MXR is marketed as a combination chorus and as such earns its spot in these rankings. If you’re interested in sounds akin to 1960s rotary speakers with a healthy dash of Hendrix-y wobble, this is the pedal for you.10. Boss CE-5 Chorus Ensemble
A newer update to the classic CE series, the CE-5 adds a useful filter control that makes it a particularly flexible chorus pedal. It’s the current scion of the genre-defining Chorus Ensemble series, and is a go-to option for anyone who loves the sound of Alex Lifeson or British new-wave guitar.

The post The Reverb Top 10: Chorus appeared first on The Guitar Magazine.