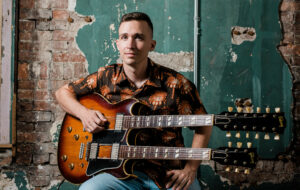 The Thrill Of The Chase: True Vintage Guitar’s John Shults

Let’s make no bones about it: the world of vintage guitars can be an intimidating place into which to venture. The stakes are high, and recognising the various tells that indicate whether an instrument is a fake or the real deal can seem like a dark art known only to grizzled veterans of the scene. However, one young guitar dealer from Birmingham, Alabama is making waves with both his social media savvy and refreshing transparency.

READ MORE: Amp FAQ: How do I know if my replacement speaker is safe to use?

We meet with John Shults of True Vintage Guitar in Nashville as the heavy summer air turns stormy. In addition to sharing some entertaining tales of his many guitar safaris, he shows up with a small but devastating array of gear for our perusal, including a first-year Stratocaster, one of the cleanest ’53 Goldtops you are ever likely to see, a 1959 Gibson EDS-1275, an Americana-branded 1963 Magnatone 262B Custom and a 1946 Fender Model 26 Deluxe. There’s also the pièce de résistance: the 1958 Les Paul Standard that John flew to Cape Town to obtain back in March, which now resides with Joe Bonamassa.
Nicknamed PJ because of the name handwritten on a label on its case, the ’58 Burst is hand-delivered for our shoot by Bonamassa himself. Joe is effusive in his praise of John’s operation, acknowledging that the 32-year-old is “on a roll” in terms of the streak of rare instruments he has unearthed. The rise of True Vintage Guitar has certainly been meteoric, but we’re curious to know what pulled John into the business in the first place.
The 1958 Les Paul Standard that John tracked down in South Africa was offered to him by a retailer in Cape Town. A local family walked into the shop looking to sell the instrument, which had belonged to their late grandfather.
“It kind of felt like gravity,” he says. “As far back as I can remember, I always loved old things and always loved guitars. But I didn’t really have musicians in my family – nobody was really interested in music like I was. I had a guitar and did my best with it but I remember hearing about vintage guitars and thinking I would never be able to experience that.”
That would all change, however, when a guitar-hunting project during his sophomore year studying business at the University Of Alabama yielded a 1972 Martin D-28. “My friend wanted a good acoustic and I was like, ‘This is a great acoustic.’ He was like, ‘I don’t want an old guitar’. Who has ever said that in their life? It blew my mind. In my world, everyone wanted an old guitar! That was the unobtainium everyone wanted.”
John spent some of the money he’d earned from his part-time job on that guitar, and one guitar deal led to another – and then another. “I loved that guitar but thought I was more of a Gibson guy than a Martin guy, so I sold the D-28 and made some money on it and thought, ‘Woah, this is the most intoxicating bit of money making I’ve ever done’. I’d never really thought of it as something you could make a career out of, but I just started buying and selling and followed whatever was piquing my interest at the time. Tweed Fender amplifiers and Gibson flat-tops, for the most part.”

We wonder if John ever feels any sense of personal risk walking into these situations alone, in the middle of nowhere, and even if things get a little scary sometimes.
“Absolutely!” he laughs. “I’ve bought a vintage guitar in a trailer park outside of Knoxville at 1am. That was interesting. But I try to do my best to communicate over the phone so I hear their voice. I need to hear them answer questions in a way that makes sense for the story. If I show up to buy your doubleneck and it’s perfect, playable and mint and you don’t know anything about it, that’s a problem. If I show up and it’s covered in gross 1970s finger juice, it plays like junk, you don’t know anything about it and are asking for help with it, that makes sense to me. You inherited it. That’s what they look like when you inherit them – they don’t look perfect, a lot of the time they look terrible!
“The story is so important. The timeline has got to make sense. Usually their timeline is off – they might say they bought it in ’66 but it didn’t exist until ’71 – but that’s close enough. After that much time, with original owners, the timeline often gets confused. But if I show up and the guitar is super-clean and perfectly set-up, I don’t like that. I’m probably walking on that guitar because that’s a guitar that’s currently being played. And then if the person’s trying to tell me they don’t know what it is, those things conflict.”
This 1946 Fender Model 26 Deluxe is a thrilling amplifier to plug into. “I had it serviced but shockingly enough, that original speaker cone from 1946 is in spectacular condition and it actually sounds pretty good,” says John.
Air miles
Not long after our meeting, John lands his second Burst of the year in the shape of a 1960 Les Paul Standard purchased from its original owner, a woman from rural Illinois who had played it with her band in the early 1960s before putting it aside when life got in the way. For John, Illinois was at least a little closer to home than the ’58 he located in Cape Town.
“That one didn’t follow the rules of any other guitar safari,” he recalls. “It was deep Covid – the international flights were empty. I could take up an entire row, I could use as much bin space as I wanted. So to bring the guitar with me on the plane was not a problem. Although KLM cancelled my return flight, and I had to come back from Cape Town via Doha in Qatar.”
Gruelling homeward journey aside, the South African trip was a resounding success, not just because of the extraordinary guitar John brought home with him but also because of the warm welcome he received – despite being over 8,000 miles from his Alabama home.

“South Africa was a dream come true,” he says. “Normally I’m in super-rural places but Cape Town is like the LA of South Africa, it’s fantastic. I was so welcomed by the sellers. They had me over for a braai – a South African barbecue. It was tough going over there because it was such a big deal and a little bit scary but they were so cool, so inviting and just made me feel like family.”
When asked what’s next for True Vintage Guitar, John says he’d like to explore Bursts a little more. “I went right to ’58, the one that’s hardest to get,” he says. “I’d love to have a ’59!”
Something tells us you’d be a fool to bet against him tracking one down.
Visit truevintageguitar.com and follow @truevintageguitar on Instagram for more.

The post The Thrill Of The Chase: True Vintage Guitar’s John Shults appeared first on Guitar.com | All Things Guitar.