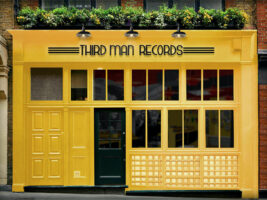 Jack White’s Third Man Records has announced that it will open a London location, serving as a record and merch shop, a headquarters for Third Man in Europe, as well as a performance venue.

London’s Third Man Records will open on 25 September on Marshall Street in Soho. A set of exclusive records will be released by Third Man’s favourite UK artists in celebration of the opening.
The location has been designed personally by Jack White. It was inspired by the hardships of 2020 and 2021, which highlighted the need for a physical space to keep record stores and live music alive.
Alongside your standard record shop and venue operations, there are some characterful quirks planned for the location that make it distinctly Third Man. Third Man Books will be running a Literarium, a lucky-dip-based book dispensing machine – the second of its kind in the world. Third Man Records will run an old-school token-operated recording booth, where you’ll be able to record your material straight onto vinyl.
The celebratory musical releases set to arrive in the shop upon opening are from a range of Third Man’s favourite UK artists, with some extra Motown contributions coming in from Detroit.
Paul Weller, David Ruffin, The Jesus & Mary Chain, Cornershop, Gina Birch of The Raincoats and The Magic Roundabout are all either contributing some previously-unheard material or recording something new for the opening. The releases will be available across all Third Man locations, as well as on its webstore, upon the opening of the location.
Third Man Records’ London location is the third physical location to be opened, and marks a crossing of the pond for the label: it joins locations in Nashville, Tennessee, and Detroit, Michigan.
You can find out more at thirdmanrecords.com.
The post Third Man Records to open physical location in London appeared first on Guitar.com | All Things Guitar.