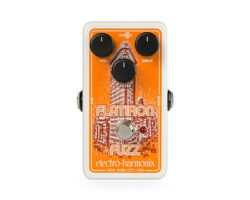 The apparently endless flow of pedals from New York’s Electro-Harmonix shows no signs of abating as the company launches a further three newcomers this week: The Flatiron Fuzz, the Sovtek Deluxe Big Muff Pi and the Nano Battalion Bass Preamp and Overdrive.

The Flatiron Fuzz, is billed as: ‘an extremely versatile, classic op-amp powered fuzz/distortion unit housed in a pedalboard friendly, die-cast chassis. The distinctive sound of the Flatiron Fuzz is a result of its classic, late ’70s style circuitry and the fact that it delivers symmetrical hard clipping. As a point of reference, a player might refer to the old Rat pedal’.

The pedal features three controls: Volume, Drive and Filter. Volume sets the output level and Drive adjusts the amount of sustain and distortion. The Filter control is actually a low pass filter with a movable cut-off frequency. This lets the player dial in the precise amount of high-end they prefer, from dark to raunchy.

The Flatiron Fuzz is named after the historic Flatiron Building in New York City. It’s an iconic landmark located just down the block from EHX headquarters in the 1970s and it’s the building pictured on the pedal.

The new pedal features true bypass switching for maximum signal path integrity in bypass mode, comes equipped with a 9V battery, and accepts an optional EHX 9 Volt power supply. It is available now and carries a U.S. street price of $72.70.

The pedal comes equipped with a 9 Volt battery and will accept an optional EHX 9 Volt power supply. U.S. Street Price of $149.00.

Controls include Volume to set the master output level, Blend to adjust the ratio between the clean and distorted signals, Drive to control the intensity and saturation of the distortion and Tone which cuts high frequencies from the distorted signal.

The Nano Battalion features all analogue circuitry and comes with an EHX 9-volt power supply, is available now and has a U.S. Street Price of $117.50.