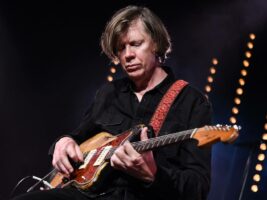 Thurston Moore has announced dates for a brief tour in September which kicks off with one show in London before heading over to the US.

Moore announced the tour on social media, but has been cryptic about who will be joining him onstage at the shows apart from fellow ex-Sonic Youth drummer, Steve Shelley.
The posts suggest the guitarist’s usual touring backing band – consisting of My Bloody Valentine’s Debbie Googe on bass and Nøught’s James Sedwards on guitar – could include a change in members.
“New York state of mind September 12 2021 with Steve Shelley and ? serenades of car horns and concrete rumbling subway soliloquies,” he wrote in one post.

You can see the full list of tour dates below. Tickets are available now, here.

Moore dropped his seventh solo studio album, By The Fire, last September. In our full review, we called it “a record that starts out in some place quite accessible and spreads its wings from there, reminding us what a wonderful sonic innovator Moore remains.”
The post Thurston Moore announces North American tour dates for September 2021 appeared first on Guitar.com | All Things Guitar.