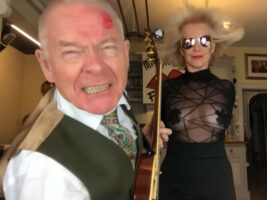 READ MORE: Bad Religion guitarists talk bringing vintage Gibsons on the road: “It’s a player guitar and it’s beat up – as they should be”

In typical Sunday Lunch fashion, the video features Willcox singing to the song’s first two verses and chorus as Fripp strums to its signature riff.
“The Lipsticks out and the duo cover an anthem from the Cardigans!!” reads the video caption.
Check out the performance below.

Written by The Cardigan guitarist Peter Svensson and lead singer Nina Persson, My Favourite Game was released in 1998 and found minor international success, reaching number three in Sweden and number 14 in the UK.
The song’s music video, starring Persson herself, caused much controversy when it was first released due to its depiction of car crashes and reckless driving. Many European channels, such as MTV UK, only played an edited version of the video where all the imagery of car crashes and reckless driving were removed to meet broadcast standards.