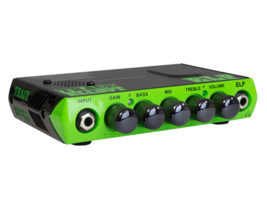 Trace Elliot has announced the immediate UK availability of its new ELF bass amplifier. The diminutive bass head delivers an impressive 200 continuous Watts (RMS at 4 ohms) amp, weighs a mere 0.73Kg and is small enough to fit in a back pocket.

Designed in the UK and the US, the ELF head features a 3-band rotary EQ with three proprietary Trace Elliot filters: low centre (80 Hz), mid centre (500 Hz) and high centre (4.2 KHz). A wide range input gain contain control with three regions of operation – (uncompressed, variable multiband compression, overdrive) and ultra-high pre-amp input impedance (>10meg ohms) for maximum sensitivity when using passive pickups. A bicolour LED level indicator is on-board to signal when the preamp compressor engages.
XLR outputs, with a ground lift switch, ensure onstage tone is matched with the tone in the PA. A headphone output is included, making it equally suitable for quiet bedroom practice and onstage performance. Transporting is made simple as the ELF comes complete with an embroidered nylon carry case with shoulder strap.
The UK RRP is £295.